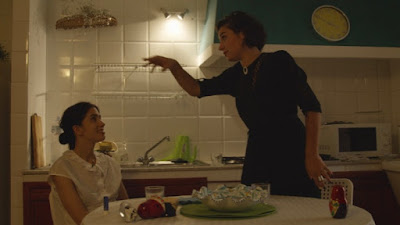 Nelly Ben Hayoun's I AM (NOT) A MONSTER is - to be frank - a bunch of pretentious wank. She's apparently trying to discover the origins of knowledge by doing lots of expensive superficial things like flying to Ethiopia and seeing the bones of "Lucy" and asking the museum director if this is the origin of knowledge, or flying to the British Museum and looking at the Rosetta Stone and asking the curator if this is the origin of knowledge. And this sums up exactly what's so frustrating of this documentary - she gets such brilliant access to some really smart and knowledgeable people and COULD have made a documentary that was focussed and discursive and fascinating.  Her adoption of Hannah Arendt as a philosopher-muse, does open up the beginnings of some really vital questions about our contemporary flirtation with authoritarianism. Time and again in this doc we see an eminent philosopher or political theorist begin to discuss what Arendt might have made of this time, only to have Ben Hayoun cut away to some utterly juvenile project involving a puppet that looks like Arendt.  Arendt deserves better - these museum curators and philosophers deserve better - and we the audience deserve better.

I AM (NOT) A MONSTER is screening in the BFI London Film Festival Documentary Competition. It has a running time of 98 minutes. It does not yet have a commercial release date.