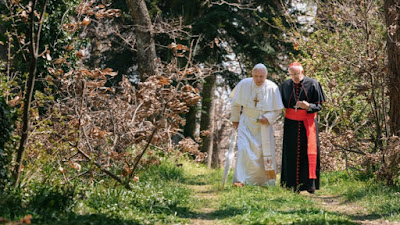 I realise that all reviews are subjective reactions, but this will be even moreso than normal. I can't pretend to review a film about the two living Popes without referencing my own complicated history with the Catholic Church and deep feelings about both characters. What I can say is that director Fernando Meirelles (CITY OF GOD) and writer Anthony McCarten (DARKEST HOUR) have created a movie of rare compassion and good humour. The only criticism one might make is in the asymmetry of its interrogation - more of which later.

As the film opens, we see the death of John Paul II and the election of Benedictus XVI aka the old Cardinal Ratzinger.  We see this in brilliant visual-kinetic form, with quick cutting and sumptuous production design taking us into the theatre of the College of Cardinals and their ancient rituals.  It's an election fought between doctrinaires and reformers, and the conservatives win. Ratzinger is depicted then and throughout as vain, power-hungry, in love with the trappings of his office. He is German - so comes from the rich heart of the Catholic world.  His rival, the future Francis I, is a reformer, modest by nature, from the periphery of Catholicism - the poverty of rural Argentina.

We quickly move Benedictus to his moment of crisis. The Church is beset by scandals over the Vatican Bank, and most heinously the child sex abuse scandal.  It was Ratzinger's role in covering this up, in his role prior to being Pope, that made me cry when he was chosen.  He struck me as more concerned to save the reputation of the Church than to protect innocent children. And then of course he shocked us by announcing his retirement!  Not entirely unprecedented but shocking all the same.

This decision, and his alleged conversations with his chosen successor, form the meat of the film.  I have no idea if the two men met on such terms, or if Ratzinger ever had a change of heart that made him advocate for a reformer. I severely doubt it. But as presented, this is a deeply moving relationship.  At first, Ratzinger keeps his motives to himself, and keeps Francis at a distance, literally backing away from a hug.  But as the conversations develop we suddenly realise that we are moving into the sacrament of confession, mutually performed by the two priests.

It is posited that Francis is motivated by penance - for his collaboration with the totalitarian regime in Argentina when head of the Jesuit church there.  After this he has a change of heart, of conscience, is stripped of his power, and becomes a liberation theologist in the poorest parts of Argentina.  From conservative to quasi Marxist is quite the leap.  As Ratzinger so eloquently puts it, Francis must accept the mercy he believes the Church should embody.  He is absolved.  In this part of the story, told movingly in flashback by a simply marvellous Jonathan Pryce, I was equally impressed by Juan Minujin as his younger self.

We then move to Ratzinger's confession. I am not sure what Mereilles' motivation was, but here is where we get the asymmetric interrogation. While we go through the emotional grind with Francis, we barely here Ratzinger's confession. The film almost skips over his handling of the child sex abuse scandal as if too appalled to go there or maybe - just maybe - too respectful of the office and its previous holder to accuse a Pope?  He too is absolved, and seems relieved. This is far less satisfying.

We then move to the film's final act.  Francis is elected, eschews the "cabaret" and sets about changing the Church. He speaks to climate change, reaches out to the poor, to refugees in Lampadusa.  And we are led to believe that his friendship continues with a comedy watch of the world cup final between Germany and Argentina at the end.

Overall, I found this to be a profoundly moving film, especially as regards the depiction of Francis.  When he is elected and moves to the balcony to make his first ever speech as Pope, I had tears in my eyes.  And yes, I know that Ratzinger was given an easy ride, but I would like to think that everyone is capable of redemption, forgiveness, and peace, and if this indeed why and how the previous Pope retired it brings me genuine happiness. I just wish I could believe it.

TWO POPES has a running time of 126 minutes and is rated PG-13.  It played Telluride, Toronto and London 2019. It will have a limited theatrical release on November 27th before being released on Netflix on December 20th.
Posted by Bina007 at 20:18