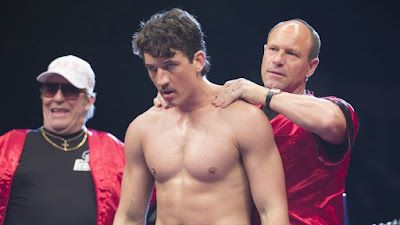 BLEED FOR THIS is a deeply mediocre entry into the underdog boxing genre - a film that feels like it wants to THE FIGHTER when it grows up.  It's a movie filled with caricatures rather than characters, hammy performances, and adds nothing to the august cinematic tradition of shooting boxing matches.

The film tells the story of real-life 1980s boxing champion Vinny Pazienza, who suffered an horrific car crash and was told he'd never walk again. He eschewed neck fusion for a risky "halo" metal brace drilled into his head.  And while the slightest knock to that brace might have rendered him paraplegic, Vinny disregarded medical advice to train in his basement, brace and all.  He went on to win a title bout in his hometown, coming from behind, surviving ten rounds.

The problem is that no-one in this retelling feels like a fully fleshed out authentic character.  Vinny's mother is simply a prayerful nervous Catholic - his sister is simply a nagging wife - his brother-in-law is just a dumbfuck - his dad is a cigar-chomping vulgarian - all the family scenes feature a loud Italian family eating lasagne and talking over each other.  This is the stuff of deep deep cliche.  The women Vinny dates get short-changed too - they're just interchangeable totty. The director is only interested in them insofar as he can relive some kind of sub-Scorsese vision of Vinny showering them with casino chips.  The lead characters don't fair any better.  Vinny's coach is a washed-up alcoholic whose only motive and purpose is to be Vinny's coach. There's no journey here - no emotional growth or nuance - compare and contrast to Clint Eastwood's character in MILLION DOLLAR BABY.  And what about Vinny himself?  He evidently has a tolerance for physical pain and a single-minded determination to win. But why?  Where did it come from? How does he sustain it through the crash? We never get any glimpse into his emotional life or thought process. And the risible attempt to wrap up his journey with a nice bow in the final interview of the film just makes no sense at all.

So I hated the script and thought the boxing scenes were filmed with none of the style or panache of the great boxing dramas.  What about the acting?  The only three actors who get to do anything are Miles Teller as Vinny, Aaron Eckhart as the coach and Ciaran Hinds as the dad.  And they are good to bad in that order. Teller clearly physically commits to the role and does as well as can be expected with the script.  Eckhart puts on weight and shaves his head to play the coach, but never really convinces as a schlubby alcoholic -  he remains too good-looking and too together - even in his drunkenness - he never really lets himself get messy enough.  And Ciaran Hinds is just super-hammy as the dad - as if he's doing a third-rate Robert de Niro impression.

Just poor show all round.