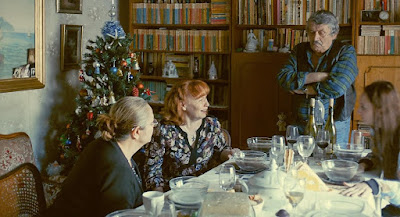 Cristi Puiu's SIERANEVADA is a masterpiece of black comedy and social commentary, minutely observed, laugh-out-loud funny and moving by turns.  The near three hour film takes place almost exclusively in a contemporary Romanian apartment as an extended family gathers for the wake of an elderly uncle. As tradition dictates, and although the women have prepared extravagant quantities of food, no-one can eat until the priest has been and performed the remembrance rites.  Except that after an hour of excruciating waiting, once the priests have been and gone, we still cannot eat? Why, because the grandson has to wear the newly bought suit that was blessed by the priest. But it's too big so it has to be altered.  And then there's a massive family argument in which the dead man's son is accused of multiple adultery and half the family won't eat until he's left.  Meanwhile people come and go - one daughter-in-law keeps threatening to go to Carrefour - a mopey teenage daughter turns up with a random drug up friend who proceeds to pass out on the dead man's suit.  And all the while the family arguments build and resolve in tears or laughter.  One son uses dead Uncle Emil's internet connection to show his incredulous cousins conspiracy theories about 9/11.  In the kitchen, a garrulous old aunty reduces a daughter-in-law to tears by telling her that the Communists were right and that all priests should be kicked out.

All of this proceeds, with countless people moving in and out of cramped apartment rooms, always dutifully shutting and opening doors, trying and failing to gain some privacy and peace.  And all the while, this gathering is meant to commemorate a dead man, who barely features in conversations that range from politics to petty jealousies.  It cannot be coincidental that the only time the heart of the play - the son Lary - can really grieve for his father - takes place when he leaves the flat to rescue his wife from angry neighbours who've boxed in her car when she's parked in the wrong place.   Only then do we have a moment for contemplation - for tears - recriminations and sorrow.

SIERANEVADA - with its technical brilliance - authentic depiction of the claustrophobia of family life - and mordant wit - has to be Puiu's finest film since his superb THE DEATH OF MR LAZARESCU.  All of us who grew up in, or still live with, multi-generational close-knit, ever-argumentative, ever-forgiving families will find much that is familiar here, despite the foreign setting.  And kudos to all the actors who manage the logistics of the shoot and still manage to appear naturalistic. Most of all, huge respect to the technical team, and DP Barbu Balasoiu for capturing the crazy cramped brilliance of it all.

SIERANEVADA has a running time of 173 minutes.  The movie played Cannes, Toronto and London 2016 and was released earlier this year in France and Romania. It opens in Poland on June 2nd.
Posted by Bina007 at 16:24