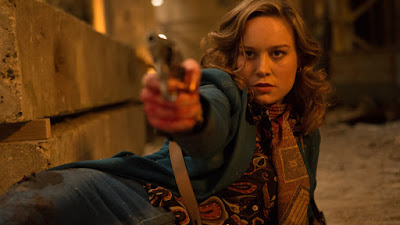 Ben Wheatley's HIGH RISE may have been one of the most disappointing films of LFF2015 but his quick, scabrous shoot-em-up thriller FREE FIRE is a welcome return to form.  Moreover, after 12 days of melancholy art-house movies, it was the perfect palette cleanser and finale to this year's exceptionally good film festival.

Short, sharp, cheap and nasty, the movie takes place almost entirely in a dingy warehouse some time in the 1970s.   Brie Larson plays the sole woman in the film and is presumably some kind of arms broker.  The buyers are two IRA terrorists played by Cillian Murphy and Wheatley alum Michael Smiley and the salesman are a South African (Sharlto Copley) and his enforcer (Armie Hammer).  Also present are associated side-kicks and half-wits played Sam Riley, Jack Reynor, Noah Taylor and Babou Ceesay.  Basically, this is a bunch of scoundrels, where trust and intelligence are both in short supply. So when a junkie driver brings up an old beef with another moron, shots get fired and pretty soon we're in a full on seventy minute shoot out.

The prevailing tone is darkly comic.  The violence, physical pain and bloodshed is pretty graphic and the action is brilliantly choreographed.  But it's all about the mordant wit of the cast, with even the wooden but pretty Armie Hammer showing some facility with Amy Jump's script.  But ultimately the star of the film, if there can be one in this massive cast, is Sharlto Copley's Vern, with his bleach blonde mullet, and likeable incompetence.   Overall, FREE FIRE is perhaps the most wilfully disposable of Wheatley's work, but it's also the most straightforwardly fun of his films. It's a film for film lovers and those who want to glory in the cliches of the seventies action flick,  the hairdos, the dodgy pornstaches, the medallions.  It's hard to believe this came from the same director who gave us A FIELD IN ENGLAND!