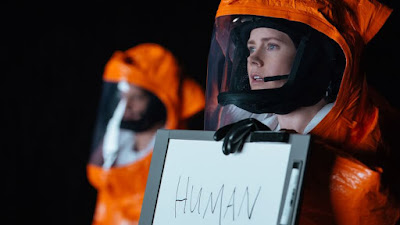 ARRIVAL is a handsome, intelligent sci-film with stunning visual and aural design and great performances. It's a little bit lit down by thematic and plot similarities to some other recent sci-fi films, but remains a superb film.

The film stars Amy Adams as a linguist called in by the US government to interact with aliens that have landed 12 spaceships all over Earth.  As the movie opens, each host country is co-operating with the other and sharing research - learning that the Heptapods communicate visually and slowly translating their non-linear speech.   But pressure is on - the Chinese is leading a group of nations who interpret their messages as threatening - withdraw from co-operation and are potentially about to launch a first strike.  This leaves Adams' character in a race against time to have the spirit of scientific co-operation trump that of nationalistic belligerence.

This straightforward plot is complicated by a thesis about the nature and power of language itself.  In an early scene, Adams' character hypothesises that the specific language that we learn affects not just the way in which we think, but the actual neural wiring of our brains.  And so, by extension, to learn a new language could be to rewire the brain.  Accordingly, we have an intellectual idea being explored here - one that posits that by learning the aliens' non-linear language - one that exists outside of conventional time - that Adams' character might herself learn to think, behave and experience life in a non-linear fashion.

This gives us a film that is tricksy - playing with the concept of knowledge and memory and experience in a manner that echoes INTERSTELLAR, albeit without Nolan's thorough scientific grounding.  It also gives us a movie that wants to explore the nature of grief and whether you can and should alter life choices based on non-linear memory.  I also felt that the central concept of a protagonist whose primary emotional experience is  grief echoed that of GRAVITY.

The upshot is that whilst I really loved the design, look, sound (kudos to director Denis Villeneuve) and performances in ARRIVAL, the film left me a little bit underwhelmed.  It felt less thoroughly worked out than a film like INTERSTELLAR and less emotionally affecting than GRAVITY.  For a spoiler-filled explanation of why I was really disappointed by the film - read on after the release info.

ARRIVAL has a running time of 116 minutes and is rated 12A.  The movie played Venice, Toronto and London 2016.  The movie will be released on November 11th in Australia, Brazil, the Czech Republic, Germany, Portugal, Slovakia, Canada, Estonia, the UK, Lithuania, Norway, Romania, Sweden and the USA. It will be released on November 24th in Italy; on December 8th in Belgium, France, Azerbaijan, Belarus, Greece, Kazakhstan, Russia and Ukraine; and in Singapore on January 12th 2017.

SPOILERS - This movie struck me as a liberal comfort blanket for all those people traumatised by the times in which we live - times of deep capital and income inequality that have manifested in a rise in social unrest and nationalist populism - coupled with a civil war in the Middle East.  In that context, I want sci-fi films - and films generally - that engage and reflect the times in which we live. I feel that this film festival has showcased a number of films that make hard choices and refuse to pander to the audience with a happy neat Hollywood ending - whether Manchester By The Sea, or A Monster Calls  or Personal Shopper.  So the fact the screenwriter of Arrival - Eric Heisserer - chose to resolve his plot with a touchy feely United Nations ending felt just hugely out of step with the times and the festival and kind of inauthentic. Did anyone really believe that the belligerent Chinese general (itself a lazy racist but all too prevalent current stereotype) was going to change his mind because future General had told Adams' character his wife's dying words. Indeed, when he leaned in to tell her the magic words, the audience at the Odeon actually laughed.  It was all just too wrapped up with a bow.  Consequently, the real finale - which should've been the big realisation about Adams' character letting her daughter die, felt hollow for me. I contrast this with how involved I was in Sandra Bullock's character's emotional struggles in Gravity....
Posted by Bina007 at 15:53