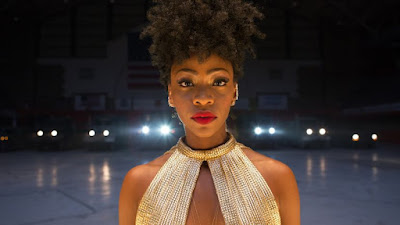 CHI-RAQ is Spike Lee’s most vivid, audacious and successful film since MALCOLM X. It’s a tour-de-force adaptation of Aristophanes Lysistrata set amidst the gang violence of contemporary Chicago - a place with a deal toll higher than that of US forces in the Iraqi and Afghan wars. Both that play and this film posit a world in which the women are so sick of war that they impose a ban on sex until the men make peace. Lee keeps the plays basic plot structure and somehow manages to balance the tonal shifts between raucous sex comedy and domestic tragedy with such confidence and success it makes the head spin to think of it. And so we have Samuel L Jackson cast as the narrator, dressed as a Harlem pimp, complete with cane and crocodile shoes, delivering rhyming couplets with such charisma, panache and, as appropriate, anger, as to make this almost a career-best performance. (It’s edged out for me by DJANGO UNCHAINED). And we have the Trojans and Greeks recast as rival gangs run by Wesley Snipes as Cyclops (a sadly relatively slight role) and Nick Cannon as Demetrius, the most recalcitrant gang member and lover to the modern-day Lysistrata - an outstanding and award-worthy performance by Teyonah Parris. Now wouldn’t that be something? If the Academy overlooked the more conventional dramatic performances that beg for nominations - Amy Adams in ARRIVAL I’m looking at you - in favour of something as balls-out brave, funny, and strong as this role? And while, we’re on the subject of adulation - how about awards for Spike Lee and screenwriter Kevin Willmott in what has to be one of the most intelligent and verbally dexterous modern day adaptations of an ancient text. To the point where I can’t wait to get a copy of the screenplay and indulge in all the in-jokes and clever rhymes I missed in the film because they were coming so fast. To be honest, there’s nothing to criticise in this film. Perhaps it could be a bit shorter in its middle section. But I can forgive a film almost anything if it features THE WIRE’s Senator Clay Davies uttering an on-screen personal best “sheeeeeet”. Thank god for Spike Lee still making films this visually compelling, intelligent, angry and emotional. How much more effective and entertaining to have John Cusack’s priest tell us that “mass incarceration is the new Jim Crow” than watching Ava Duvernay’s dry documentary, 13th. And how angry-making that it took a year for this film to be shown in the UK. If #BlackLivesMatter, can someone - anyone - get this film out there, NOW!

CHI-RAQ has a running time of 127 minutes. The movie was released earlier this year in the USA and played Berlin, Toronto and London 2016. It will be released in the UK on December 2nd.
Posted by Bina007 at 20:41