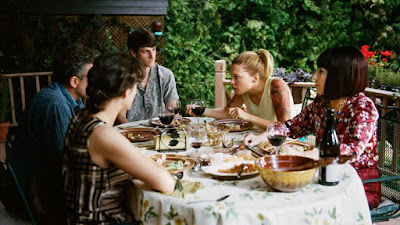 ITS ONLY THE END OF THE WORLD is the least Dolanesque of all of Xavier Dolan’s films. Rather than a three hour epic of melodrama, often with extreme mummy issues and queer themes, set to an 80s synth-pop soundtrack, we get a relatively taught if no less histrionic 90 minute chamber drama. This is because the film is based on a stage play rather than Dolan’s own musings. The film stars Gaspar Ulliel as a famous author returning home to his estranged family after a 12 year absence to tell them he’s dying. But as the family bicker and fight and make-up over lunch, the tension mounts as to whether he’s actually going to do the deed. We sense that his tongue-tied sister-in-law (Marion Cotillard) actually figures out his news early on and tries to facilitate him telling at least his elder brother (Vincent Cassel). And it may be that the elder brother also figures it out near the end and tries to protect their little sister (Lea Seydoux) from the news. The mother (Natalie Baye) meanwhile - gloriously larger than life in typical Dolanesque form - seems to be utterly in the dark.

A lot - then - is left unsaid, despite all the apparent swearing and emotional craziness that is on screen at all times. I left the cinema with more questions than answers, and also the sense of a lack of closure. This is presumably the point. But I wanted this film to be opened up by Dolan, both in terms of length, theme and shooting style. I wanted him to have had the artistic freedom to open the screenplay and really delve into those gritty emotional confrontations that are only hinted at in this film. I wanted him to expand on the beautifully shot and scored memories of the author’s teenage affair. And I wanted Dolan most of all to pull back his camera from the claustrophobic extreme close-up and give us more of his trademark framing and tableaux of New Romantic beauty and vividness. Sadly, without this trademark visual and aural flair, all we are left with is a vaguely claustrophobic dingy family drama in which much is left unanswered, and the viewer's interest in the underlying issues piqued but unsatisfied.  Not quite sure how, of all his work, this movie won Dolan the Cannes Grand Prix.

IT'S ONLY THE END OF THE WORLD has a running time of 95 minutes.  The movie played Cannes and London 2016 and was released earlier this year in Belgium, Canada, Farnce, the Czech Republic and Sweden. It goes on release in Russia on October 20th, in Spain on December 9th and in Germany on December 29th. The movie won the Grand Prize of the Jry and the Prize of the Ecumenical Jury at Cannes.
Posted by Bina007 at 20:25