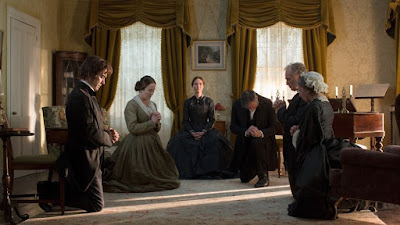 A QUIET PASSION is a beautiful, deeply sympathetic portrait of the iconic American poet, Emily Dickinson.  It portrays her as a smart woman, hugely sensitive to the constraints placed upon her by society for being a woman, and an ugly one (by her own account) at that.  She is also at odds with convention by virtue of her complex relationship with religion. She believes she has a soul and fiercely guards its independence. She won't be forced into some outward piety, and searches for some kind of spiritual contentment.  As she grows older, she becomes more despairing and bitter - about the fact that only a few of her poems have been published, and that they have been altered by her editor - about the fact that all those she loves leave her - about her loneliness and simultaneous fear of connection.  In fact, in Cynthia Nixon's desperately sad and moving portrayal of Emily Dickinson, I saw echoes of Rebecca Hall's similarly affecting portrayal of the journalist Christine Chubbuck, living a century later.  Both were smart and uncompromising women who sought love but also recoiled when it was offered.  The key difference is that where poor Christine could not resist her depression and fell into despair and suicide, Emily Dickinson somehow has the courage to persist, and to survive and to write, even though she does retreat into an utterly private world - self-confined to her beloved home.

Terence Davies' film is beautifully shot and photographed by DP Florian Hoffmeister (DEEP BLUE SEA) with meticulous costume design.  The first half is really very funny too - with the young siblings highly witty and the family depicted as one of deep love and respect.  Emily's father seems to be a beacon of enlightenment - educating his daughters and protecting Emily's right to write and indeed to be witty and irreverent in front of their disapproving relations.  But it's the second half of the film that will stay with me.  Cynthia Nixon far surpasses anything else she had done with her authentic, heart-felt and heart-breaking performance. And she is ably supported by a cast that includes Jennifer Ehle as her effervescent younger sister Lavinia, and Keith Carradine as her father.  Most notably, Joanna Bacon has a handful of spectacular scenes as Emily's apparently quiet mother who apparently has a deeply melancholy inner life.

A QUIET PASSION has a running time of 125 minutes.  The movie played Berlin, Toronto and London 2016 and opened earlier this month in Spain. It opens in the UK on November 18th.
Posted by Bina007 at 12:52