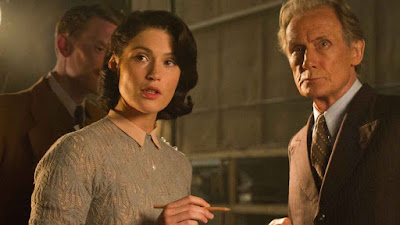 THEIR FINEST is a handsome and genuinely funny film that also - admirably - does not shy away from the darker aspects of life in London during the Blitz.  German air-raids kill friends - people whisper about the bad news from Poland - enemy citizens have been interned - and there's a desperation to get America into the war.  The war stirs up social conflict too - women have the opportunity to do jobs left empty by conscripted men, but not without causing resentment and facing opposition.  But the over-riding picture is one of a drab and deprived city, filmed and clothed in dingy colours, trying its best to keep its spirits up and win the war.

To that end, the Ministry of Information was charged with making not just informational films but also soft propaganda feature films - authentic and optimistic. And it's on the set of one of these that the events of this romantic comedy take place.   Gemma Arterton (GEMMA BOVERY) stars as Catrin Cole, a secretary turned screenwriter hired at a reduced wage to write "slop" - dialogue for the female characters. She's married to an artist (Jack Huston - BOARDWALK EMPIRE) who resents her financial success and finds herself drawn instead to her co-writer Buckley (Sam Claflin - THE HUNGER GAMES).  Together, they write the screenplay to a movie about Dunkirk - seeking to transform a story about an ignominious British retreat into one of wartime heroism by two plucky young girls who sail their tugboat to rescue British soldiers.  The movie catches the eye of the government who think it might appeal to American cinemagoers and so persuade them to enter the war. The only problem is, American audiences need an American hero, and a less reticent romantic ending.

The first thing to say is that this film is really very funny indeed.  Properly laugh out loud funny.  Bill Nighy is a scene-stealer as the ageing actor reluctant to play anything but the male lead. His arrogance and pomposity are a joy to behold.   He also does things with the word "semolina" when he sees an attractive woman (Helen McCrory - PENNY DREADFUL) enter a restaurent that will stay with me forever!  But Rachel Stirling is also very funny as the gay Ministry producer with some of the most acerbic lines.  Rounding out the comic trio, we have Jake Lacy (GIRLS) as the American pilot who can't act for toffee with some spectacularly good bad acting.  And then - there are wonderful one-liners or cameos from Richard E Grant and Jeremy Irons. Put them together and I laughed an awful lot at this film - maybe more than watching MINDHORN - and I laughed A LOT at MINDHORN!

The second thing to say is that I do admire the movie's willingness to show the darker aspects to life in wartime, and indeed to tackle misogyny head on.

But that's not to say that the film is without its flaws. The romance is a bit obvious and well-worn in its development.  The final act drags - the emotional beats are obvious.  But I can forgive any film its flaws when I can remember comic lines hours after watching it.

THEIR FINEST has a running time of 115 minutes.   The movie does not yet have a commercial release date.
Posted by Bina007 at 18:19