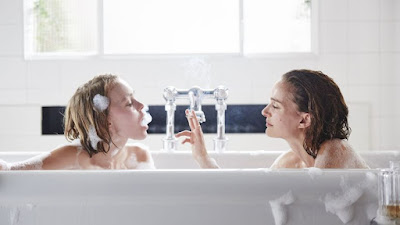 There once was a Romanian Jew called Bernard Natan who came to France and took over the legendary Pathe cinema studio.  He was the pillar of the movie industry - a man of power and taste. He even had an air of scandal about him - rumours abounded he had directed, and maybe even starred in, hardcore porn.  But when the Nazis came, power and influence did not protect him. He was accused of fraud, thrown into prison, and released only to be handed over to the Nazis and sent to Auschwitz. This could have made an exceptionally interesting movie, a little like CABARET in contrasting the carefree hedonism of the glamorous set with the rise of fascism just at the corner of our vision.  But that is, sadly, not the film that Rebecca Zlotowski chose to make.  Rather, she takes elements of Natan's life, recasts them, and mixes them in with elements of spiritualism and science for a film that contains far too many ideas and not enough focus.

In Zlotowski's PLANETARIUM, Natan becomes Andrew Korben (Emanuel Salinger) - a fantastically rich movie producer.  One night he stumbles across a pair of American psychics - the Barlow sisters - and decides to give them a movie deal.  He seems to have an almost Conan Doyle-esque obsession with proving that spirits exist, and indeed capturing them on film.  Accordingly, he diverts cash from his company to pay for dubious experiments with the younger sister (Lily-Rose Depp), who actually does appear to have some kind of gift. Meanwhile, he casts the elder sister (Natalie Portman) in a movie, perhaps to get her out of the way. The rise of anti-semitism and fascism is seen in throwaway lines until the very end of the film. A dinner party guest mentions his admiration for Mussolini in between snorting lines of cocaine - a lover shows the sister a porno that Korben allegedly starred in to slander his name - she is also accused of being the Jew's whore.

But when the final tragedy struck the moment had no emotional power because the film had been so unfocussed and ramshackle to that point that my concern as to its direction had taken me out of the film.  And without that narrative cohesion it just became a rather random series of tableaux vivants to be judged on their own merits - for their composition, costumes, atmosphere. All that is top notch - the hair and costumes are gorgeous and period-authentic.  Lily-Rose Depp does nothing but look cute.  Portman at least does act.  And the atmosphere is often heady - thanks to an exceptionally good and bold score from Robin Coudert - using an almost dazzling variety of instruments and styles in an expressionist soundtrack that is often better than what we're seeing on screen. Indeed, I would go so far as to say that it is worth seeing this film for the soundtrack alone.