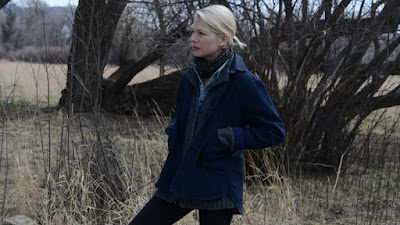 Kelly Riechardt (NIGHT MOVES) returns to the London Film Festival with this hauntingly melancholy portmanteau film.  The film tells the story of three different women who have achieved a degree of material success in their lives, and contrasts this with the people who have been left by the wayside.  In each story, the women are living lives that are defined by a failure to communicate, and a lack of self-awareness regarding this failure. They are trapped in their success, unknowing, uncaring.

In the first story Laura Dern plays a small-town lawyer annoyed by a client who just won't believe when her when she tells him he has no case.  She is frustrated by what she perceives to be his misogyny in refusing to hear bad news from a female lawyer. But the reality is that he is actually very distraught at the loss of his livelihood and desperately lonely.   Jared Harris (MAD MEN) gives a very moving performance as a man on the edge and Dern convinces as the lawyer who sees his breakdown as an inconvenience rather than a cause for empathy.  I also love how Reichardt keeps the final interpretation of whether she has gained empathy open at the end of the film.

In the second story we see Michelle Williams (MANCHESTER BY THE SEA) play a successful career woman who's building a house in the country and wants to buy some reclaimed stone from an old lonely man called Albert (Rene Auberjonois)  to give the house an authentic look.  The irony is that she's not actually interested in authentic lives lived in authentic Montana. She tolerates the old man's rambling stories only insofar as she can build her dream-house.  Meanwhile, her husband (James LeGros) who is her employee is emasculated and her daughter is alienated.  But in the final scene we see her smug smile of satisfaction as she reviews the building site.  Once again, we have a successful woman living alongside people but not really with them in a meaningful sense.

In the final story, Kristen Stewart (PERSONAL SHOPPER) plays a newly minted lawyer who took an evening job in a bumblefuck village out of fear she'd get no job at all.  She's utterly wrapped up in her social mobility and her success and her insane travel schedule. So much so that she cannot recognise that a ranch hand (Lily Gladstone) who randomly stumbled in her class has a crush on her, to the point of a panicked response when the lawyer ends her classes.  There's a devastating scene where they are apparently having a conversation but making no connection.  The lawyer is utterly self-involved and just needs someone to sit opposite her in the booth in the diner and listen to her problems. She's not actually interested in what is motivating her companion to be there, night after night, and maybe consciously - maybe subconsciously - uses her.  It's a devastating portrait of a lonely woman who latches onto the first exotic person she meets, and while all the performances int his film are strong, it's Lily Gladstone who steals every scene she's in and breaks our hearts.

CERTAIN WOMEN has a running time of 107 minutes and is rated R. The movie played Sundance, Toronto and London 2016 and will be released in the USA on October 14th.
Posted by Bina007 at 20:59