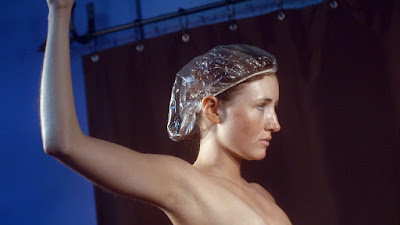 When I was picking my films for this year’s London Film Festival, I made the decision to watch KATE PLAYS CHRISTINE and CHRISTINE - two films about the on-air suicide of journalist Christine Chubbuck. I’d never heard of Chubbuck before, but the feature film on the subject starred Rebecca Hall - an actress I admire greatly. And so it felt like it was be even more insightful to see another spin on that subject - this time a documentary, with a different actress in the title role.

Unfortunately, my idea backfired. The actress Kate Lyn Shiel may well be as talented as Hall, but the documentary KATE PLAYS CHRISTINE feels badly put together and a little amateur. Director Peter Greene essentially follows Kate around as she researches the role. We see her get a fake tan, get brown contact lenses, get a wig, get dresses that approximate what Christine wore. But the final look is kind of cheap and high school play rather than a convincing approximation of the real life journalist. And when we watch Kate play out certain scenes from Christine’s life, straight after interviewing people about those events, it feels really staged and fake. Watching this documentary, I felt like I was watching a mediocre actress scrambling to get insight into the death of a tragic woman, but failing either to get any, or indeed to convey any to me, sitting in the audience.

And this was all the more frustrating because two days before I’d seen Rebecca Hall deliver a performance of rare integrity, empathy and nuance in CHRISTINE. Rather than magnifying and enhancing my understanding of this tragic story, all that KATE PLAYS CHRISTINE did was anger me at this rather superficial and clumsy attempt to get under the skin of the real-life Christine. I guess what I’d really wanted - in retrospect - was to see a documentary featuring Rebecca Hall talking about how she created her role, and the emotional toll it took on her. This wasn’t the droid I was looking for.

KATE PLAYS CHRISTINE has a running time of 112 minutes.  The movie played Sundance, Berlin and  London 2016. It opened earlier this year in the USA and opens on October 14th in the UK.
Posted by Bina007 at 20:40