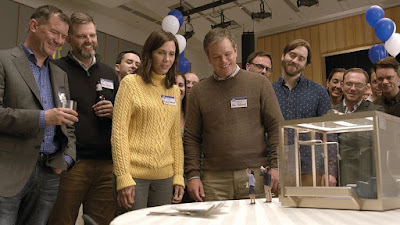 DOWNSIZING is a deeply patronising movie that pulls of the remarkable feat of being both annoying liberal and socially conscious AND offensively racist. There's probably a decent 45 minute episode of Black Mirror in there somewhere, but the surrounding 90 minutes of meandering, indulgent padding renders the whole work frustrating and meaningless.

The big concept of the film is that a bunch of Norwegian scientists have invented a way to miniaturise humans to 5 inches tall. And if humans can do this, they can leave a much lighter environmental impact, as well as use their current net wealth to live a deeply luxurious life. After all, you may not be able to afford a 10,000 sq ft mansion but you can probably afford one the size of a shoebox. This range of motives for "downsizing" reflects a parody of the cultures that DOWNSIZING deals with. So the liberal touchy feely hippie Scandies downsize to save the world and their mini-colony looks like The Shire. By contrast, Americans downsize to afford a luxury retirement in Disney like gated communities.

Of course, this being (a piss-poor attempt at) sci-fi, none of the actual world-building makes sense. The downsized wouldn't survive rain or insects and there's an irony in the amount of energy being created in the downsizing probably making climate change worse. None of this would matter if the story was captivating and you cared about the characters. But the story is all over the place. Is this about an everyman recreating his life once his wife leaves him? Is it about finding yourself on a gap year trip to Norway? It is a piece of propaganda about climate change? Or is an undercover expose about illegal immigrant working conditions? It's like writer-director Alexander Payne through Big Ideas in the air like so much confetti and the result is a baggy, poorly scripted and edited mess that outstays its welcome. Worst of all, much of its comedy in the latter half of the film lies in taking the piss out of a Vietnamese woman's strong accent. In 2017. This is just flabbergastingly offensive on a Jar Jar Binks level.

DOWNSIZING has a running time of 135 minutes. The film is rated 15 for strong language, drug misuse and sex references.  The movie played Venice, Toronto and London 2017 and will go on release in Spain and the USA on Dec 22nd, in Australia, New Zealand and France on Dec 26th, in Norway and Turkey on Jan 5th, in Argentina and Bulgaria on Jan 11th, and in the UK, Germany and Sweden on Jan 18th.
Posted by Bina007 at 23:46