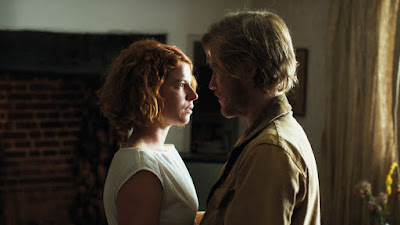 Micheal Pearce's BEAST is an assured directorial debut that's half claustrophobic family drama in the manner of Lars von Trier, and half serial killer whodunnit. It stars Jessie Buckley (WAR AND PEACE) as Moll - a bullied daughter of an oppressively middle-class family living on the insular island of Jersey.  Given how overlooked and snubbed she is, it's no surprise that Moll is drawn to the charismatic outsider Pascal (singer-actor Johnny Flynn).  She has little concept of self-care, putting herself in harm's way and lying to the police because she wants the attention.  Her family hate Pascal because he's of a lower social class but they are more justifiably concerned that there's a serial killer on the island.  The question is how far Moll suspects and suppresses her suspicions about Pascal and what she'll do with them given that she's alienated most people on the island.

Where the film works best is in chronicling the passive-aggressive coercion of a manipulative family.  Geraldine McEwan is truly frightening as Moll's mother, and Jessie Buckley demonstrates formidable range as she moves from bullied, self-harming daughter, to passionate lover, to agent of justice. The serial killer piece is good but perhaps less assured in its pacing and reveals. Nonetheless, this is a highly impressive first feature from Pearce and I look forward to seeing how he develops as a film-maker.