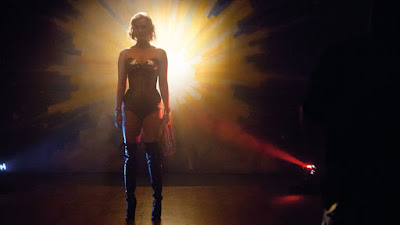 PROFESSOR MARSTON AND THE WONDER WOMEN is a really fascinating and subversive story about the real-life creator of Wonder Woman, told in a disappointingly conventional and banal manner by director Angela Robinson (HERBIE FULLY LOADED, says it all).

The story begins in 1920s Harvard-Radcliffe, where Professor Marston (Luke Evans) is a psychology professor with a theory of dominance and submission and proto-feminist views on how women should rule the world. This is frankly unsurprising as he's married to the fantastically smart, sexy, unconventional Elizabeth (Rebecca Hall - dazzling) - who is intellectually everything a Wonder Woman should be.  They both fall in love with Marston's teaching assistants - a student called Olive (Bella Heathcote), a woman who knows what she wants, but is far more submissive than Elizabeth.  The three form a menage a trois that is truly based on love as well as sex, but are kicked out of Harvard.  Forced to earn a more conventional living, Elizabeth becomes a secretary, both women have kids, and Marston invents Wonder Woman after a trip to a S&M costume shop that blows his mind. He combines the dominance and submission of both the women in his life - their fierceness and softness - to create a modern comic that will very deliberately radicalise children with ideas of feminism and, er, bondage.

I recently got a trade hardback of the early Wonder Woman comics and it was shocking to see how overtly sexual they were - some of the frames are like something out a Bettie Page film. But also how radically feminist they were, despite Wonder Woman's ludicrous outfit.  And I love how this film shows how subversive the character was, but also questions the more dubious aspects of the supposed feminism through the framing device of an interrogation by Connie Britton's moral authority.  The story - and Rebecca Hall's character - are enough to make this film worth watching.

The problem is that everything about the direction is utterly conventional to the point of banality. Every set choice, the way the scenes are constructed, the utterly forgettable score - it's all so dull. And it's particularly sloppy not to have the characters age over the 25 odd years of the film. It was incredible - and drew me out of the film. It's not the origins story that Wonder Woman deserves and I won't be rushing out to see another Angela Robinson film any time soon.

PROFESSOR MARSTON AND THE WONDER WOMEN has a running time of 107 minutes and is rated R. The film played Toronto and London 2017. It opens in the USA on October 13th, in Germany on November 2nd, and in the UK on November 10th.
Posted by Bina007 at 15:58