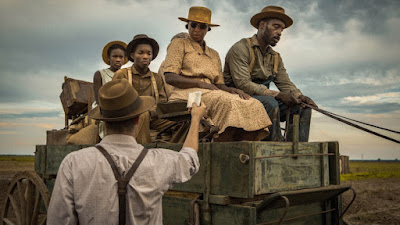 Dee Rees' MUDBOUND is a profoundly cliched and deathly slow-paced film about racism in post-WW2 Mississippi.  We're on a mud-drenched farm, owned by a small-minded white man (Jason Clarke) and his rather superficial, simpering  but ultimately warm-hearted wife (Carey Mulligan). They live there with their two daughters, and his cruelly racist but caricatured Pappy (Jonathan Banks), while the brother (Garrett Hedlund is off fighting in Germany.  Also living on the farm are the black tenant farmers, of eminent virtue and no character nuance whatsoever. As Meester Phil put it, the mum is played by Mary J Blige in the "Oprah Winfrey" role. The tenants son Ronsel (Jason Mitchell) is also off in Germany fighting the war, and experiencing far more freedom than he ever found in the USA.

The plot of the story, such as it is, sees the white brother and black son return from WW2 and form a friendship through their shared trauma.  Clearly nothing good is going to come of this anachronistic enlightenment and in due course we get a searingly violent scene set to a beautiful gospel hymn. In fact, I would wager that it's an unintentional irony of this film that all the really truly shitty stuff happens either in church or when set to a hymn.  I think the ending is meant to be uplifting, nonetheless, but I found it all rather patronising and fantastic - as if Germany post-war was an utopia of racial harmony.

Overall, this is a long drawn-out film, whose paper-thin characters can't stand the weight of history thrust upon them.  And I found the wannabe Mallickian voice-overs deeply irritating.  Seriously - watch the first half and ask yourself - would this be any less good - would my understanding of characters' feelings be any less - without this incessant portentous rambling?

MUDBOUND has a running time of 134 minutes and is rated R.  The film played Sundance, Toronto, New York and London 2017. It goes on release on the internet in the USA on November 17th.
Posted by Bina007 at 12:37