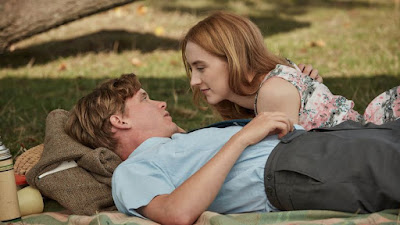 ON CHESIL BEACH is a very well acted and shot adaptation of Ian McEwan's novella right up until the point whether the author tacks on a two-part time-jumping epilogue that ruins the logic of the film.  More of that after the end credits of this review, in case you want to be kept spoiler free.

The movie starts in a hotel room in a British sea-side resort in the early 60s. A young couple nervously attempt to have sex on their wedding night, but both are inexperienced.  In flashbacks we discover that the girl, Florence (Saoirse Ronan) is an upper-middle class Oxford graduate attempting to make a career as a concert violinist. She comes from snobbish parents (Emily Watson and Samuel West) who have raised her in an incredibly conservative manner. She has attempted to rebel against their snobbery, partly by marrying Edward (Billy Howle), but retains an intense fear of sex.  The flashbacks also allow us to learn more about Edward, a lower middle class boy (but oh how that tiny gradation in class looms large!) whose father is a primary school teacher and whose mother has suffered brain damage. He's also has a first class degree, but from UCL and is currently somewhat drifting in life.  Marriage to Florence thus gives him a job and financial stability.

The beauty of the book and the film is that there's no doubt that the couple love each other. Indeed, that is it's central tragedy. But poor Florence is frigid, for reasons hinted at but made far more explicit in the movie. And poor Edward is too young and insecure to know how to handle her reaction, and instinctively blames it on class rather than emotional trauma. We see more of his family life in this adaptation and I really loved Anne-Marie Duff's performance as Edward's mother - in fact I would argue that this storyline is really the heartbreaking part of the film.  The main story is of course moving and well acted but the choice of epilogue makes Florence less sympathetic.  This isn't a problem per se, it's just that the subsequent actions jar with the portrayal of Florence that we see in the majority of the film.

ON CHESIL BEACH has a running time of 110 minutes. The film played Toronto and London 2017 and opens in the UK on Jan 19th.

Spoilers for the film:  What particularly flummoxed Meester Phil was how Florence could go from being so traumatised by sexual abuse that she couldn't face sex with Edward to being happily married and pregnant three years later.
Posted by Bina007 at 21:13