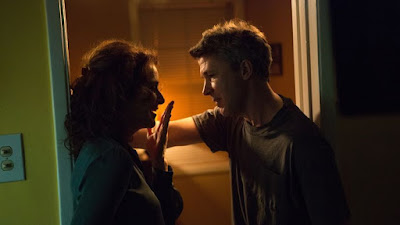 Azazel Jacobs' THE LOVERS is a light, art-house version of IT'S COMPLICATED in which husband and wife Mary and Michael, who are both cheating on each other, discover that they're actually attracted to each other again.  The first hour of the film proceeds with hardly any dialogue - the emotional arc is all conveyed through looks, texts, reactions.  It's really quite wonderful to see and you need actors like Debra Winger and Tracey Letts to pull it off and sustain the audience's interest. The second thirty minutes of the film sees the culmination of all this lying  takes its toll - both on the couple, their son and their lovers. I have to say that I was a bit surprised in how Jacobs decided to resolve the issues, and that the film is pretty forgettable, but I certainly enjoyed it while it lasted.

THE LOVERS has a running time of 94 minutes. The film played Tribeca, Melbourne and London 2017 and was released earlier this year in the USA and Canada.
Posted by Bina007 at 15:31