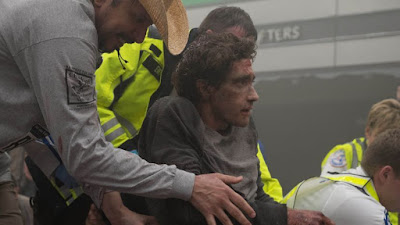 David Gordon Green's STRONGER attempts to tell the story of Jeff Bauman - a young man who had his legs blown off in the Boston Marathon bombing; apparently struggled with peoples attempts to turn him into a symbol of triumph in adversity; but eventually reconciled himself to his fame.  In order to do this, his character arc of frustration and depression is framed by the story of his ex-girlfriend Erin, who gave up her job to nurse Jeff back to health, and fell pregnant by him in the process.  Jeff's reluctance to accept his public role as hero is thus echoed in his reluctance to take on the role of dependable boyfriend and father.

The film is well enough done. Jake Gyllenhaal looks appropriately overwhelmed and frustrated; poor talented Tatiana Maslany has little to do as Erin but be on the bring of tears. I found the rest of the cast - how shall I say this - insufficiently Boston.  Miranda Richardson was a bizarre choice as Jeff's alcoholic mum. I felt that David Gordon Green was probably trying to portray a loud, obnoxious family of the type we got in THE FIGHTER or that we see pastiched in WAHLBURGERS, but it just fell flat here.   On the positive side, I really liked the way they held back from showing Jeff's experience of the bombing until well into the film, although I wonder if some might find it too explicit or even exploitative. The highlight of the film was, for me, the sleeper story that gets Jeff back on track - I won't say more for fear of spoiling it - but once the true emotional heart of the story was revealed it absolutely broke me and I sobbed my way through the rest of the film.  So, STRONGER is by no means a perfect film, but where it works it really works, and the emotional payoff more than compensates for some of the more eccentric directorial choices.

STRONGER has a running time of 116 minutes. The movie played Toronto and London 2017. It has already opened in Singapore, the USA, Canada, Estonia and the Netherlands. It opens in Portugal on Oct 12th, in Australia and New Zealand on Oct 19th, and in the UK on Dec 8th.
Posted by Bina007 at 22:19