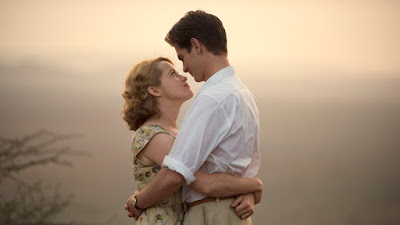 As predicted, and in keeping with a long line of banal, pretty heritage products opening the BFI London Film Festival, Andy Serkis' directorial debut BREATHE is a deeply dull and forgettable drama about a very nice couple.  There isn't any dramatic tension or any surprises. The story proceeds as expected and then comes to a neat end.  It's all done in a perfectly competent manner, but the big emotional set pieces failed to move me (although Meester Phil was successfully emotionally manipulated despite himself.)

The plot is based on the true story of Robin and Diane Cavendish. In the late 50s, the blissfully married couple were living in Kenya in sun kissed perfect imperial gorgeousness.  And then, just after Diane fell pregnant, Robin contracted polio, rendering him paralysed from the neck down and unable to breathe without an artificial respirator.  Such was the state of medical science at the time that Robin was condemned to a short and depressing life chained to a respirator in a hospital ward. (Although as we see later, in the one genuinely moving scene in the film, the poor bastards in a German sanitarium have it far worse.)

There are never any emotional outbursts or arguments, because they love each other perfectly. Even their teenage son (who in real life went on to produce this film) never has an angry frustrated teenage strop.  And so we merely perambulate earnestly toward a conclusion that comes half an hour later than it really needed to.  The problem about making movies about paragons is that they are dull. Maybe the couple were really this unflappable and lovely.  But ye gods, you can't power 120 minutes of cinema out of that.