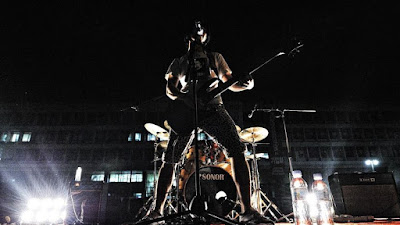 BAMSEOM PIRATES SEOUL INFERNO is amazingly mischievous fun for about the first hour of its running time. Two kids form a shitty punk band in the great tradition of The Sex Pistols. They're self-consciously bad at playing their instruments, but have a lot of attitude.  In a vague, kind of post-modern way, they're too cool to actually have an ideology. They're post-ideology. They're against tuition fees and privatisation and authoritarianism and boring middle-class stuff like learning to play an instrument.  When people claim they can't understand their lyrics, they do a gig with a powerpoint presentation, but then claim they deliberately made the lyrics un-understandable. They come across as very smart, very funny and creating their own mythos on the fly.  The one thing they're not, is, truly subversive. In the same way that The Sex Pistols ruffled a lot of insecure people in the UK, Bamseom Pirates are deliberately provocative but neither are enemies of the state.  The Pistols said they were the antichrist, but they weren't satanists. So when Bamseom Pirates mention North Korea, or Kim Jong Il, that doesn't make them North Korean spies. This seems so obvious you wonder why I'm saying it until you realise that the Pirates' manager was prosecuted under South Korea's National Security Law for, effectively, treason, for retweeting a North Korean tweet. And when he went to trial, the band and their lyrics effectively went on trial too.

This latter half of the movie was absolutely fantastic in its philosophical and emotional impact.  I was forced to reassess my dismissive views of the band as CLEARLY as funny and OBVIOUSLY not spies. After all, if I lived in Seoul, tens of miles from the North Korea border, in range of missiles, would I be so confident and tolerant of dissent and satire? Would I perhaps become as intolerant and impatient as the serious young men on the debate programme on TV questioning why we should tolerate such childish behaviour?  Emotionally, watching this lighthearted prankster turned into a shy, submissive, apologetic wreck by a disproportionately serious and angry trial was heartbreaking.  The manager keeps speaking of being confused. He hates authoritarianism and was always so proud to be satirical in the South, knowing this behaviour would not be tolerated in North Korea. So when he's prosecuted under the easily abused National Security Law, it's as if the border doesn't exist. I could've cried for him and his crushed spirit.  In that, BAMSEOM PIRATES SEOUL INFERNO became an exceptionally good doc - because it not only shone a light on an issue I didn't know existed, but it provoked me and moved me too.

BAMSEOM PIRATES SEOUL INFERNO has a running time of 120 minutes. There are tickets available for both screenings at the BFI London Film Festival.
Posted by Bina007 at 18:24