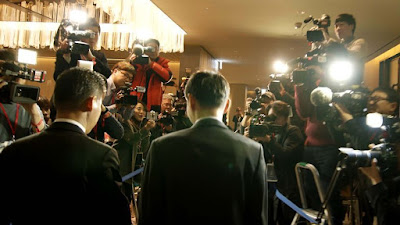 ALPHAGO is one of the most enjoyable films at this year's festival - as tense as any thriller, as emotionally involving as any love story, and I learned a lot too! I cannot recommend this movie highly enough - not just to computer geeks and Go fans, but anyone interested in seeing the potential of machine learning to change our lives.* The story begins in Google Deep Mind in London where a bunch of computer nerds have invented an AI that can play Go - the ancient Chinese boardgames that's so complicated and challenging that it's seen as the ultimate challenge to any AI.   The team invite the current European champion to play the AI and he's roundly beaten.  They then spend five months improving the AI using that player as an advisor and trying to address some of the AI's weakness. When this is done they challenge the best Go player in the world - a South Korean called Lee Sedol.  The rest of the film is a play by play of the five game series.

The amazing thing about ALPHAGO is that even though I knew the result of the match I was genuinely tense in each game. I was nervous for the programmers who seemed so sympathetic that their programme would stand up to the trial. And then I felt utterly emotionally involved in the journey of this waif-like Korean guy who was trying to defend humanity against the threat of AI. I can't tell you the outpouring of emotion at each victory or unexpected move; the fun of seeing the commentators and players faces as unexpected moves are played; and the sheer exhilaration when the match is concluded. Most of all, I was left with a feeling of respect for both sides of the match - the programmers were full of respect for the skill of the human brain and Lee was full of respect for the programmers. It reminded me of how civilised true intellectuals can be.

ALPHAGO has a running time of 90 minutes. The film played Tribeca and London 2017.

*Or indeed end them. I am convinced that once AI gets to a certain point it will figure out it doesn't need humans and that will be the end.
Posted by Bina007 at 16:47