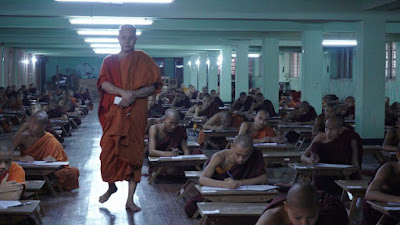 Barbet Schroeder’s THE VENERABLE W is a deeply painful and provocative documentary about a buddhist monk who has incited genocide against the muslim Rohingya ethnic minority in Burma.  It's shocking for two reasons. First, it's a savage indictment of a religion that we think of as basically lovely and harmless and, in its leader the Dalai Lama, charming and beatific. And yet here we have a member of that same religion spouting hate speech that is so similar to Hitler's depiction of the Jews as to be chilling.  It makes you wonder why the Dalai Lama has been conspicuously silent in condemning these actions, and how the hate speech that began to really gather strength well over a decade ago, has been allowed to culminate in the current refugee crisis. It also exposes the hypocrisy of a religion whose priests are meant to take a vow of poverty but who sport very expensive smartphones.  Maybe these are also donations from worshippers looking to improve their karma? The second reason why it's shocking is that a woman who has been raised to the level of modern day saint by the international community - Aung San Suu Kyi - does absolutely nothing to prevent the genocide.  Apologists may say she's constrained by her alliance with the military dictatorship that truly runs Burma, but her claim that the the Rohingya are burning their own homes is absurd.

One can only be grateful that Barbet Schroeder - a long-time documentarian of evil - took the time and patience to expose this scandal.  And that he had the intelligence to approach the Venerable Wirathu and appeal to his vanity in order to get him to participate in the movie.  And there's the power of the film - we see Wirathu calmly and pompously espouse hate speech against muslims of a kind and savagery that would make Marine le Pen blush.  He is damned from his own lips.  The power of the film is to show the clear link between the speech and its consequences - footage of soldiers and Burmese civilians beating the shit out of muslims and burning mosques. It's a savage indictment of racial and religious prejudice and makes a great companion piece to AZMAISH - also showing in the festival - which chronicles the rise of anti-muslim violence in India.

I cannot imagine that there is a more timely, relevant or necessary film to watch at this year's festival and yet I was saddened to see that the screening was two thirds empty. Where were all those bloggers using their free passes that were watching BEAST an hour earlier?  It's also a savage indictment of modern film criticism and amateur journalism that they couldn't be arsed to both watch this film or put a spotlight on the issues it highlighted. Shame on them.

THE VENERABLE W has a running time of 107 minutes.  The film played Cannes, Melbourne, Locarno and London.  It opened in France earlier this year.
Posted by Bina007 at 19:43