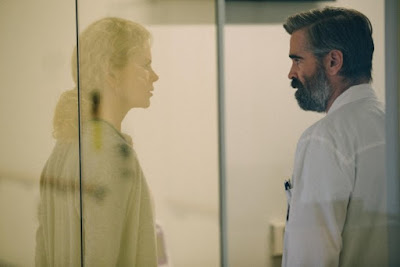 Yorgos Lanthimos’ THE KILLING OF A SACRED DEER is an exceptionally brilliant dark horror movie based on a Greek myth that I won’t name for fear of spoiling the story. The first hour of the film sees building dread and foreboding. A heart surgeon called Stephen (Colin Farrell) has struck up a sinister looking relationship with a 16 year old called Martin (Barry Keoghan). Is he seeking sexual favours, grooming him? The gift of an expensive watch and the lies speak to that. But then Stephen introduces Martin to his family - wife Anna (Nicole Kidman) and his kids Kim and Bob. So maybe Martin is just a loner who needs mentoring? About 45 minutes into this exquisitely paced film, Kim and Bob suffer paralysis and loss of appetite. A battery of medical tests suggests there’s nothing wrong with them. And an hour into the film we learn the reason for this mysterious mythical illness. The reactions it provokes are both darkly funny and tragic, as family members vie to make their case, and cold hard-headedness faces sentimentality.

Lanthimos’ shooting style is so deliberately paced and framed that it reminded me of Kubrick. There’s a couple of scenes where Stephen walks through hospital corridors that become so tense because of precisely where the camera is placed and the accompanying music. Although we shift locations many times, there’s a kind of claustrophobia in this film as grind toward the inevitable conclusion. Cinematographer Thimios Bakatakis’ complete, compulsive control of the frame matches Stephen’s refusal to be ruffled until the last, and the deliberate, daringly deadpan language from co-scriptwriter Efthimis Lanthimos. I also loved the score that borrowed from orchestral music and opera, heightened with dramatic sound effects to emphasise the portentousness of the action.

I cannot recommend this film highly enough for its sustained tension, otherworldly tone and superb construction. I can’t say that I cared about any of the characters but that’s not really the point. I was captivated by the story and the sheer technical brilliance with which it was put on screen.

THE KILLING OF A SACRED DEER has a running time of 109 minutes and is rated R. The film played Cannes 2017 where it won Best Screenplay tied with You Were Never Really Here. It also played New Zealand, Melbourne, Toronto and London.  It goes on release in the USA on Oct 27th, in France, Greece and Bulgaria on Nov 3rd, in the UK on Nov 17th, in the Netherlands on Nov 29th, in Hong Kong on Nov 30th and in Hungary on Dec 28th.
Posted by Bina007 at 15:40