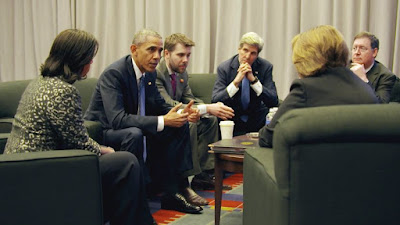 THE FINAL YEAR is a bittersweet documentary about three figures working on diplomacy in 2016. Secretary of State John Kerry is trying to negotiate a deal on nuclear proliferation with Iran; UN Ambassador Samantha Power is trying to get the girls kidnapped by Boko Haram back; Ben Rhodes, Deputy National Security Advisor is spearheading the attempts to reconcile with Cuba and keep Climate Change at the top of the agenda. In doing so, all three espouse the doctrine that America is most successful at defending her interests when she uses her soft power and diplomacy rather than her hard military power.  This, they argue, is Barack Obama's legacy.  It is an unashamedly idealistic one, and one that seeks to upend decades of assumptions about how the US does business. And it is depicted by director Greg Barker, who clearly also believes in this humanitarian mission.  The result is a very intimate and humanising picture of hard-working politicians and civil servants who really are working in service of their nation.

But the documentary is not without its problems.  For a start, although I've characterised it as a portrait of three people, the director actually sells it as a portrait of four - and that fourth is Susan Rice, director of the NSA.  The problem is that she's in roughly three scenes, provides just a soundbite, shows nothing of her personal life, and is basically a pretty anonymous figure.  I wonder Barker just didn't get enough material of Rice because of the nature of her job, or whether she was just less comfortable on camera. Either way, he should've downgraded her from a starring role in the opening credits because it raised expectations the film didn't match. Moreover, I wonder if Rice might have been more of a foreign policy Realist, and as such a fascinating counter-weight to the Internationalists.  But then that wouldn't have fitted in with Barker's narrative.

The other gaping hole in this documentary is both the protagonists reactions to Trump's gathering success in the primaries and then the response to his election. All three seem very complacent about his victory as does Barker. He actually stood up at the London Film Festival and said to the audience "no-one expected Trump to win". Well I did. And I prepared for it.  And if I did why weren't these guys less arrogant about the result.  Maybe if the liberal elite had been less sanguine they might've been better able to prevent it.

I think what Barker and I know what Power want us to take away from the film is to have renewed hope in the power of diplomacy and the value of service and not to be disheartened by Trump's victory. But frankly I took the opposite message from the film. I took the message that these three people had wasted their time on measures that Trump had immediately overturned - the Paris agreement, the Iran deal, the very idea that diplomacy can be used vs aggression (viz North Korea.)  For me, they have left no legacy, and the film shows how brittle diplomacy is, and indeed how Power is, in particular, to think otherwise.