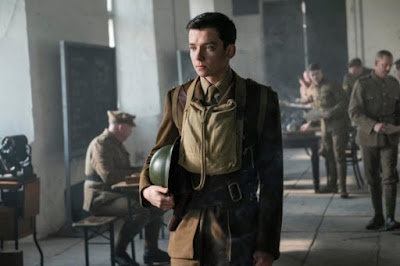 Saul Dibb (SUITE FRANCAISE, THE DUCHESS) has directed what is the stand out film of this year's festival to date, an adaptation of R C Sherriff's stage play JOURNEY'S END.  This powerfully tragic tale of men on the front line in World War One has been brought from stage to screen still depicting the claustrophobia and tension of trench warfare without ever feeling "stagey" or merely a west end show with a camera put in front of it. Rather, Dibb uses his Welsh location to good effect - his film beautifully depicts the mists rising above the trench, and one can almost feel the damp, stale air.  And his use of candlelight inside the dug-out is atmospheric and sometimes even beautiful.

The movie begins with a naive new officer requesting to join C Company in St Quentin, France, just as the troops are rotated onto the front line. Raleigh (Asa Butterfield) is full of that Dulce Et Decorum Est spirit, but is shocked to find that his schoolboy mentor Stanhope (Sam Claflin) has become a superb commander but also a cynical and volatile alcoholic - something that Stanhope is painfully aware of and scared Raleigh will tell his sister, Stanhope's beloved.  Thus it falls to Stanhope's two junior officers to take Raleigh under their wing - there's the affable, modest, epitome of the stiff-upper-lip, "Uncle" (Paul Bettany) and the working class jovial Trotter (Stephen Graham).  The officers are rounded out by Hibbert (Tom Sturridge) - a ladies man who may or may not be faking neuralgia to get away from the front - something that Stanhope is not having anything of.

Much of the action takes place in and around the officer's dugout as they unwillingly accede to an order for a near-suicide mission to fetch intelligence from enemy lines; and then as the men face a heavy bombardment for the start of the German's Spring Offensive. I found myself physically tensing throughout, I was so involved in the fate of the characters. In such an intense environment, one sees Uncle adopt an air of calm indifference and studied bonhomie to offset Stanhope's nasty aggression.  And it's the play between the two that's really at the heart of this film.  If Bettany's performance is the most instantly likeable it's Claflin who steals the movie. There's a deep and desperate vulnerability to Stanhope that reasserts itself in the film's final scenes. It's a bravura and committed performance that deserves award season recognition.