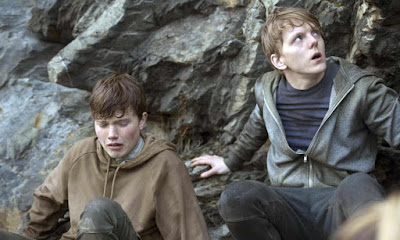 22 JULY is a nearly three hour film on Netflix by Bourne director Paul Greengrass.  Its length is explained by its conception as a three part series.  But there's a more profound explanation to do with Greengrass wanting to go beyond just depicting the 22 July 2011 bomb attack in Oslo and the shootings in Utoya that left 77 dead.  He also shows the apprehension and trial of the white supremacist terrorist, and the painful attempt at recovery by the survivor who testifies against him.  This stands in sharp contrast to the intense single-shot film UTOYA - JULY 22 which focuses exclusively on the victims experience of the mass shooting on Utoya.  I found that film to be intense - it moved me to tears - but also deeply clever in the way in which it didn't ever show the terrorist or bring attention to him.  It put the teenagers' experience first, and tried its hardest not to give the terrorist the notoriety and platform he craves. By contrast, 22 JULY is more of a procedural - running through the events of that day and the judicial response with efficiency.  I wasn't scared during the brief depiction of the violence and I wasn't on the edge of my seat during the trial.  The only part of the film that really involved me was the story of the teenage boy who suffers severe physical and emotional damage and has to gather courage to testify. But even there, I didn't have the visceral emotional reaction that I experienced watching the other film. I wonder if this is because the constant screen time given to the terrorist was alienating. It brought me out of the film because I was alarmed by the fact that Greengrass was unwittingly giving a platform to a man who committed these attacks precisely to air his views.  And I also worry that there's a type of sick individual who will see this man walking around Utoya in a police uniform gunning down kids and then spouting his racist views and be attracted to it, or see it as inspirational.  So for that reason, for its more straightforward shooting style, its almost banal procedural approach, I think 22 JULY is far from a must-see film - whereas UTOYA - JULY 22 is one of my films of the year.

22 JULY is rated R and has a running time of 143 minutes. The film played Venice and Toronto 2018 and was released today on Netflix worldwide. It also has a limited release in cinemas.
Posted by Bina007 at 09:15