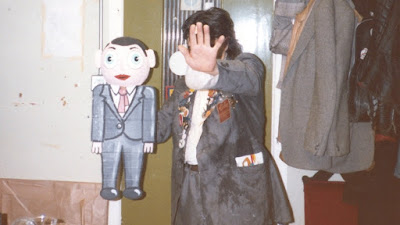 BEING FRANK: THE CHRIS SIEVEY is a beautifully assembled and edited documentary giving us something genuinely new and insightful - a look behind the papier-mache head of the late 80s and early 90s cult pop-culture icon Frank Sidebottom. For those of you who didn't grow up in Britain you may not have heard of Frank, heard any of his self-consciously bad music, or seen any of his exhileratingly anarchic TV appearances. But for a certain generation - mine! - they defined a kind of devil-may-care brilliantly inventive comedy.  Part of the joke was never knowing who was behind the mask.  But in this documentary we learn that that man - Chris Sievey - was so much more creative, inventive and tragic than we could have possibly imagined.

Sievey grew up obsessed by The Beatles and so set all his store on becoming a pop star. He wrote lots of songs - and one of them might've been a break out hit had the appearance on prime TV show Top of the Pops not been cancelled due to a strike. But he carried on plugging away to little avail. And then, one of Sievey's comic creations - Frank Sidebottom - ended up getting the fame Sievey so wanted - but as a spoof! It's hard to imagine how this must have eaten away at Sievey, but also how far after all those years trying he was like a kid in a sweet shop.

This documentary makes clear that the tragedy of Sievey is that while he was an ok musician he was an amazing visual and performance artist - from stunningly detailed casette covers and fanzines to stopmotion animation to the creation of Frank.  He deserves to be seen as truly one of the best, and one can only imagine what might have happened had his talent been channelled in the same way that Tim Burton's was.  I think Sievey could have been an amazing director.  But instead, we got a man who lost himself in the distinction between himself and Frank, became an alcoholic and a cocaine abuser, an adulterer, and remained impoverished throughout his life.  There's also a theme that's uninvestigated in this film but reads through to the viewer about mental illness -how far was Seivey perhaps bipolar and self-medicating his depression?

Despite the dark backing to the comic madness, this is fundamentally a hopeful and joyous film.  I came out of the screening with a massive smile on my face - reminded of moments of Frank I'd seen as a kid, and dazzled by the sheer talent on show. In Mr Phil's words - this is the perfect documentary - exactly what a Frank fan wants to see - the man behind the mask in context.  Moreover, it should work with people who are completely unaware of Frank - the humour simply still works, and the human interest story is very relatable.

BEING FRANK: THE CHRIS SIEVEY STORY has a running time of 100 minutes. The film played SXSW and London 2018 and does not yet have a commercial release date.
Posted by Bina007 at 21:33