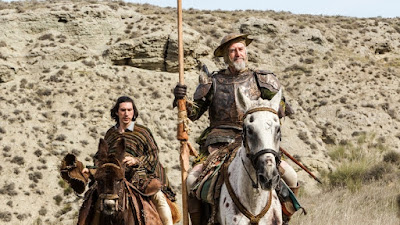 That Terry Gilliam finally managed to make his accursed Don Quixote film is a thing of joy - and how wonderful to watch it and realise that it is truly joyful of itself! I came out of the film beaming - having seen some wonderful verbal humour, some insane slapstick, some superb LOST IN LA MANCHA in-jokes, Adam Driver doing a zany Eddie Cantor song-and-dance routine, and a truly moving story about romantic delusion!

The film works as a film within a film.  As we open, Adam Driver's cynical, selfish ad director Toby is on a shoot in Spain featuring the picaresque medieval character Don Quixote - the old dusty man convinced that he is knight, who travels aimlessly with his sidekick Sancho Panza, tilting at windmills that he thinks are giants, and risking all to win the love of his beloved Dulcinea. Within the "real world" framing device, Toby is tupping the wife of his boss, who's simultaneously cosying up to a Russian oligarch who's just bought a castle. In scenes that satirise spoiled wannabe Hollywood directors we see a frustrated man reminisce about a student film he made about Don Quixote and venture back to that village to relive his youth.

What I love about the film is that it works on many levels. On one hand, it's a warning about how Hollywood can corrupt and distort. The man who played Toby's Don Quixote (Jonathan Pryce) has now gone mad and believes he IS Don Quixote and that Toby is his Sancho. And the girl that Toby fell for and told she could become a star ended up chasing that dream, failing and becoming a prostitute in Marseilles. So within this madcap comedy, Gilliam feels comfortable showing us some dark material, referencing Brexit, Syrian refugees, prejudice against gypsies, Russian corruption. And of course, we can draw our parallels to the prejudices of Quixote's time.

If the first act of the film is all about Toby's current world, the second act sees him on the road with Quixote, getting into scrapes. This is the section of the film I most enjoyed pretty much entirely because Adam Driver - freed from the shackles of a multi-billion dollar franchise - is clearly having the time of his life. The third act sees the medieval delusion rub back up against the real world in a kind of nightmarish frenzy that actually reminded me a bit of the end of THE PRINCESS BRIDE - people chasing round castles after damsels in distress on horseback...

Overall, THE MAN WHO KILLED DON QUIXOTE is the most joyous, and certainly the most coherent of Gilliam's recent films.  I had predicted before watching it that a 2hr 15 min running time meant it was bound to be a bit shambolic and have about 25 mins too much content. But I was wrong - this is actually a pretty tightly written film, and despite its many layers, it holds itself together well.

THE MAN WHO KILLED DON QUIXOTE has a running time of 132 minutes. The film played Cannes 2018 and has opened in many European countries since. It has yet to be released in the USA or UK.
Posted by Bina007 at 18:28