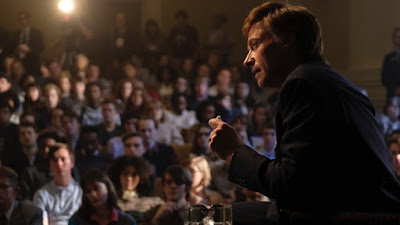 In 1988 Gary Hart was the charming, popular Democratic candidate running against George HW Bush for the president. The Oval Office was his to lose, and that he did, when he was exposed as having an affair with a young woman called Donna Rice. More than is typical, it wasn't the crime but the cover-up - his stubborn refusal to admit that he was morally culpable - his privileged outrage that the press even had the temerity to ask him about adultery. This film does a great job of showing that complete tone-deafness to the reality of then-modern politics.  That you can't hide your poor judgment and immorality behind a facade of gentlemen's silence anymore. That the press aren't your friends (as he was in fact a friend of Bob Woodward) but sceptics who should expose your malfeasance.

THE FRONT RUNNER is a new film by director Jason Reitman (THANK YOU FOR SMOKING) and a script by Reitman, Jay Carson and Matt Bai.  The movie is whip smart and technically superb. It's opening hour has a kinetic feel that perfectly sums up the shabbiness and chaos of the campaign trail and makes you feel like you're living on those campaign buses and inside the WashPost editorial room.  It feels like Reitman was going for a Robert Altman vibe - lots of layered voices -a lens that shifts curiously from conversation to conversation. The effect is a collage of impressions and moments that build to a nuanced understanding of the issues and events.

What I really liked was the very light way in which the deeper issues of gender politics and power imbalances were handled in this film - typically through the female characters who act as its conscience.  In the WashPost newsroom the one female editor tells the naive young trail reporter that Hart's lapse of judgement matters - and wonders if anyone has heard from Rice.  In the Hart campaign, it's the young woman who's left to shepherd Rice back to Miami - and actually tries to protect her thereafter, and gives an honest answer to Hart's belated inquiry after her. Most of all, it's Vera Farmiga as Hart's wife Lee who embodies the moral highground with a quiet but rage-filled performance. And while I've been reading a lot about Hugh Jackman potentially being nominated for this performance (he's fine but nothing special), for me it's Farmiga who deserves the plaudits.

My only real criticism of this film is that it really lost pace in Week Three of the campaign when the scandal comes out. Maybe it was just hard to sustain the very fast-pace of the opening hour, but I strongly feel that it could lose at least ten minutes of its final, say, 45 minutes. This seems to be a repeat offence for Reitman - his films often start strong and then sort of fizzle out.