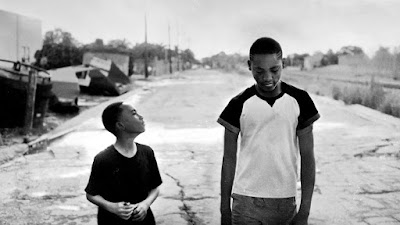 Roberto Minervini's new documentary about reactions to racism in the American South is deeply problematic. Shot in black and white for no obvious reason, the documentary seems incredibly staged.  Individual conversations might feel authentic in their content, but the framing of them, the lighting, the camera placement, all seem very contrived.  The problem with that is that once you start to question how much has been restaged for your viewing pleasure, you are brought out of the picture.

Nonetheless, even with the pretentiousness of the black and white film, and the stageyness, some of the storylines remain engaging.  The most touching of the reactions to this highly sensitised #blacklivesmatter moment is that of a mother raising two sons.  With shootings in the neighbourhood she drills into them the importance of being home before dark and staying in school. The scenes between the two brothers are touching and it's genuinely sad to see the elder start to become a delinquent by the end of the film.

The second strand of the film is also engaging but feels even more staged. A fifty-something woman called Judy is trying to make her bar work but failing.  It becomes a kind of community centre or safe space where black men and women can talk about their daily struggles with racism. This is also the strand where we get some quite shocking and painful revelations of abuse.

To have this truly personal material butt up against the utterly awful third strand is then something of an insult.  The director has shown us two positive reactions to racism - protecting your kids, and taking comfort in community. But in this third strand he gives a platform to the new Black Panthers.  I'm all for freedom of speech and it's of course more than valid to show extreme racism begetting the same - nonetheless there was something utterly hollow and almost propaganda-ish about seeing these self-appointed saviours of the black community spouting horrible racist epithets at white people, walking around with guns and scaring the shit out of the people they're meant to be protecting, and in a staged scene worthy of Michael Moore - provoking a police assault.

The final strand is just a cap and collar to the film - scenes of preparation for Mardi Gras with no context, meaning, point. What a waste of time.

WHAT YOU GONNA DO WHEN THE WORLD'S ON FIRE has a running time of 123 minutes. It played Venice and London 2018 and does not yet have a commercial release date.
Posted by Bina007 at 21:49