WHITNEY & WHITNEY: CAN I BE ME 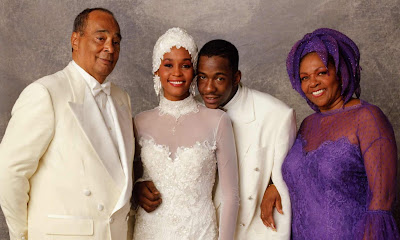 To be a kid in the 1980s was to live in an aural world created by Whitney Houston. Seven consecutive number ones, stunning good looks, she embodied all the optimism of the go-go decade.  And yet, as the introduction to Kevin MacDonald's authorised biographical documentary shows, one could as easily intercut this with much darker footage of a racially and economically divided time.  These two documentaries - one authorised and the other not - give a complementary portrait of a woman who embodied all those divisions and was ultimately undone by them. Of the two, Broomfield's documentary seems the most coherent in its diagnosis, and the darker, even if it's MacDonald's that gives us the shock revelation that Houston was sexually abused by her cousin, Dee Dee Warwick.  Put together, they give a remarkably complete view of Whitney Houston, and for my money they should be watched in the order in which they were released.  Broomfield gives the story, MacDonald supplements it with his better access to family interviews.

The picture we get is of a girl with a horrid childhood, no matter what family friend Aunt Bae says.  Sexually abused when her performer mother left her with others to tour - bullied at school for not being black enough - growing up in a ghetto ripped apart by the Newark riots - in love with a corrupt and philandering father-politician who divorced her mother who cheated with the minister of the church that provided Whitney with a second home.  So Whitney may have seemed privileged - being placed in a private school by aspiring middle class parents. But she had a lot of stuff to deal with that struck at the very core of her identity, and all this financial privilege was after all an investment in a future star - one who would have more talent, yes, but also poise and sophistication than her rivals.

We then move to the Whitney we all knew in the 80s - super successful but as a pop star with an image carefully crafted to be unthreatening to white America -, booed by her own community at the Soul Train awards.  Broomfield does a really great job of showing how this echoed childhood bullying was deeply hurtful to Whitney and may have propelled her toward dating and then marrying the most black of all hip hop stars - Bobbi Brown.  At the same time we have a woman whose best friend and protector is a lesbian, with whom she may have been sexually intimate.  Both docs make the cause that Robyn Crawford really loved Whitney and may well have been the only person who put her needs first. One can only imagine - with the benefit of watching MacDonald's doc - how if Whitney had been abused by a woman, this could've complicated her feelings of attraction toward Robyn, exacerbating issues already there from the homophobia within the black church teaching she was raised within.

The complications magnify with the amazing success of THE BODYGUARD - the inter-racial love story that magnified the black community's feeling that Whitney wasn't one of them - the huge inequality between Whitney and Bobby's success - his jealousy toward Robyn - and perhaps a need to bring her down to his level.  Both docs make clear that Whitney's brothers were already doing drugs around her and with her - and they are admirably clear and honest about that - but there's something about the toxic co-dependency of her relationship with Bobby that led to the years-long drug binge that all but killed her touring career and almost killed her recording career.  Perhaps the most tragic part of the whole thing is that it also engulfed their neglected and corrupted daughter, who soon followed Whitney to the grave.

Could it have been different? Maybe if she had married someone more stable, or not a music rival?  But would this really have resolved the sexual and racial identity crisis at the heart of Houston's life, or got rid of the exploitative hangers-on that are the through-line of all these stories of wasted talent? My major takeaway from both docs is just how cruel racial identity politics is - whether in the classroom or the awards ceremony - and perhaps re-watching the various versions of A STAR IS BORN so recently - the impossibility of a wholesome marriage between stars of unequal success.