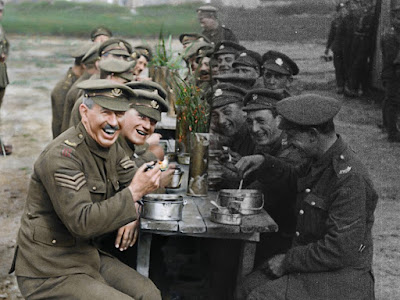 As we approach the centenary of the end of World War One, Peter Jackson has created a technically superb film and audio collage of mostly English troops serving in the trenches of France and Belgium. He was commissioned to do so by 14-18 NOW and used archive visuals from the Imperial War Museum and audio interviews with serving soldiers from the BBC.  One is impressed by his facility to simply edit down this wealth of material to create a coherent narrative that elegantly pairs visuals and audio - from declaration of war, to the rush to enlist, to basic training, arriving at the front, trench warfare, the big battle, recovering from injury, taking prisoners, and then the ceasefire. It ends with the melancholy of demobilisation, the lack of jobs and even interest in the war experience.  Added to this editing work, Jackson then brings his technical expertise to clean up the media, run it at modern video speed, and colourise it.  He introduces colour as the troops reach the front line and takes it away as they leave, giving us the impression that it's the front line that really matters and is unique to their experience. The effect of all this - but particularly the subtle animation and sound effects -are to take what can be dusty old photos and bring them to life - to make them more vivid and urgent.  I'll be honest and say that this was NOT however the deeply emotional experience that some had predicted for me. Maybe that's because I love history and have no problem being interested in old media.  But I was moved and rightly shocked by the coloured photos of men with gangrene/trench foot, or just a deceptively simple picture of yellow mustard gas rolling across a field.

Perhaps one of the reasons that I felt distanced from the film is that the faces and voices of the men fighting the way were so consistently English and white.  We sometimes here the Canadians or the Germans refer to but we never hear from them. There's one photo early on showing West Indian and Indian troops arriving in France but no contribution from them either.  Maybe this is just a result of using a set of archives that are not diverse - if so I am dismayed that 14-18 NOW - or Jackson himself, didn't feel it was worth collaborating with other countries' archives to supplement them.  It's ironic that Jackson dedicates the film to his own grandfather and yet there are precious few colonial voices here.

Some might say I am being precious - but I am truly sick and tired of seeing World War One films that have such a narrow focus of concern and are so unrepresentative - and basically historically misleading. Britain at that time was a global empire and imperial troops showed up all over the place.  It's deeply disrespectful not to give them their voice too.