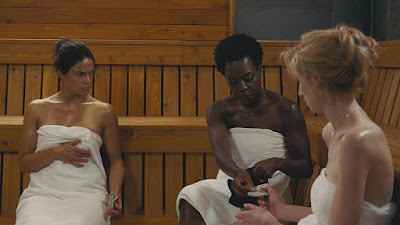 In the early 1980s the soon to be celebrated thriller writer Lynda La Plante created a British TV miniseries called WIDOWS. It was about a group of women who decide to carry out the heist that their late husbands planned, rather than succumb to pressure from the police, and a rival gang, to turn over the late mastermind's book of secrets. All along their secret weapon is that everybody underestimates them. No-one conceives that a bunch of housewives could pull this off. Apparently this tale of under-estimation and prejudice spoke to a young London schoolboy called Steve McQueen and 35 years later the now acclaimed director (12 YEARS A SLAVE) has recreated the heist film but bringing his own brand of art-house style, deep emotional contemplation and political provocation to it.  I loved many elements of this reworking - particularly its visual style and its strong central performance from Viola Davis (THE HELP).  But I found the contemplative pace undermined the thriller, and the politics, while valid, was extremely heavy-handed. Overall, the film was a disappointment, and my least favourite of his films to date.

Let's talk about what's great first.  This is a film with a beautiful visual style and sensitivity - whether in its eye for detail and location, or in the way the camera is positioned and used. Speaking to the former, McQueen really immerses himself in the diversity of life in contemporary Chicago - whether the stunning laeshore apartment of Viola Davis' Veronica and her late husband Harry (Liam Neeson) - filled with beautiful objet d'art and stylish furniture - or the overcrowded warm-hued hair salon that the heist driver Belle (Cynthia Erivo) works at. Early on there's a tour-de-force scene inter-cutting the various gang members' funerals that beautifully shows the different churches and traditions of mourning. This is a film profoundly concerned with architecture.  One of the most impressive scenes that highlights this is one in which Colin Farrell's corrupt politician drives from the impoverished ward in which he's campaigning to his swanky town house. The camera stays outside the car rather than on the people conversing within it. We don't know why until it pulls up at the town house - and then we realise that we have been seeing a short journey from poverty to wealth, and that McQueen is wearing a particular point about the plebs and the elite.  Time and again we're treated to moments like this - when the camera angle or movement is just doing something subtle and above and beyond the standard direction. Or even a final scene in a cafe with mirrored pillars, where we see both Veronica and Alice (Elizabeth Debicki) reflected in pillars looking away from each other.

Now here's where the film doesn't quite work. It's being marketed as a heist but it's not really interested in that. It's really a contemplative piece about mourning and female self-empowerment and a political commentary on corruption, racial and gender prejudice. The first theme allows us to see some superb acting from Viola Davis but substantially weighs on the pace of the film. I didn't mind too much because I knew I was watching a McQueen film and expected something more slow-paced but I was wondering how mainstream audiences might react. I also think the film is rather unbalanced. Viola Davis just blows us away.  But Michelle Rodriguez is remarkably anonymous as her fellow widow - Elizabeth Debicki looks like wounded Bambi and has a rather heavy-handed and obvious journey to empowerment - in fact the only interesting woman other than Veronica is Belle. As for the men, I'll leave it to you to judge whether you believe Harry's motivation. The other gang members are anonymous.  The opposition gang is ludicrously drawn - Daniel Kaluuya's gangster jumps the shark repeatedly.  The only real interest for me came from Colin Farrell's politician and a hilariously angry cameo from Robert Duvall as his father.

Finally, let's speak to politics. I get it. These are angry times.  But do we really need something as on the nose as a cop gunning down a black kid with no provocation as a major plot motivator, while Obama Hope posters flutter in the background?  Do we really need basically the entire Alice/Debicki arc?  I don't decry being political but let's have some more sophistication about how we do it. For instance, I could argue that just have Viola Davis on screen with her natural hair - just having the movie open with a passionate inter-racial kiss - just being able to show even-handed corruption between the black church and the white alderman - is politically provocative and far more interesting.