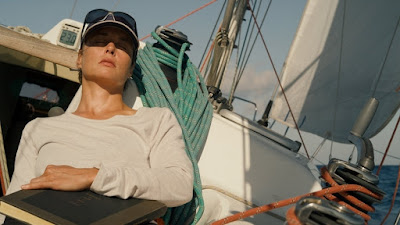 I have about as much time for political allegory as Tolkien, but Wolfgang Fischer's STYX is so well-made and tense that I could almost forgive its heavy-handed message.  The film tells the story of earnest, ludicrously competent paramedic and solo sailor Rieke (Susanne Wolff - stunning) as she sails the Atlantic. About a third of the way through this almost dialogue-less film, Rieke encounters a dramatic heavy storm, radio traffic, and then the vision of a refugee ship in distress. She radios for help, but despite promises none arrives. And then a young African boy swims to her ship, exhausting himself.  Rieke does her best for him, using her medical training. But she is firm in her position that she cannot do this for all of the refugees - her small boat simply cannot take them. This despite the protests of the boy that his sister is on the other boat.  This prompts a tense stand-off filled will sabotage and guilt. Ultimately, Rieke has to deal with the limits of her compassion and ability to help. It's a rude and ruthless awakening.

As I said before, I find allegory imperfect and frustrating but what saves this film are two things - the stunning performance by Suanne Wolff, who has to carry the film with a largely physical performance. One never doubts her practical skill and compassion.  The other star of the show is DP Bendict Neuenfels' cinematography - capturing the austerity of the ocean, as well as the savage drama of a storm at night. The technical mastery here is awesome.

STYX played Berlin and Toronto 2018. It has a running time of 94 minutes. There are still tickets available for both screenings at this year's BFI London Film Festival.
Posted by Bina007 at 14:48