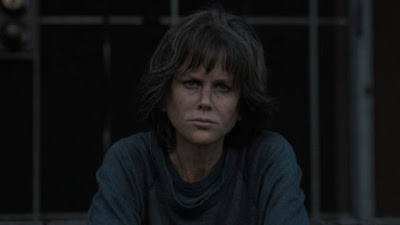 DESTROYER is a movie so tightly written, so well directed, so brilliantly tense, that by the end of the screening it was hands down the best film I had seen to date in the festival - and all that despite the fact that the make-up work is so over-done it kept bringing me out of the film for its entire running time.

The film takes place over three time periods.  The earliest is when Nicole Kidman's young local cop, Erin Bell, is teamed up with Sebastian Stan's Fed, to go undercover with a gang of bank robbers led by Toby Kebbell's Silas. In this era, everyone in the gang is playing their age, but Kidman is playing 25 years younger with some very well done subtle make-up and hair.  The next period is maybe a few months or a year later. The young couple are ensconced in the gang, and living rough has made Erin - well - rougher:  her hair is messier, her eyes start to get dark circles.  Still very credible.  And then we move forward 16 years to the current day. A now older Erin still works for the police, and is investigating a murder that signals to her that her old adversary, Silas, is back and settling old scores.  Erin is maybe in her early 40s, so actually younger than Kidman.  But she looks at least mid 50s and incredible worn by what we have to assume is heavy drinking.  The circles under the eyes, the red bloodshot look, the extreme weathering of the skin, the sunspots on the hands.  To me, this all felt just way too much. And it's not helped by the fact that director Karyn Kusama (JENNIFER'S BODY, AEON FLUX) decides to focus on Bell's aged face at both the start and the end of the film. The guy who designed the make-up - Bill Corso - has done a fair bit of horror work before, and even DEADPOOL more recently. I just feel that a more naturalistic look may have worked better here. And I'm very curious to see whether other viewers found the make-up as distracting as I did.

Anyway, the good news is that this film more than survives the bad make-up.  That it does is down to a genuinely tricksy, beautifully constructed script by long-time writing partners Phil Hay and Matt Manfredi; a sound-track that is alternately pulsating and violent or sweet and melancholy from Theodore Shapiro, and a landscape that is bleached out, harsh and lonely, created by DP Julie Kirkwood and the director. This bleak landscape beautifully frames our complicated, dark, angry protagonist - a woman trying to deal with the damage her past decisions have caused.  Some of this is done with smarts, but there's a fair amount of brutal violence, and what I love about the direction is that every punch, every kick, seems to really hurt.  This is no typical Hollywood violence. This has consequences. And the broken battered face and body of Erin Bell - just as of Jake in CHINATOWN - symbolise corruption - except this time it isn't the city, but the person. In other words, where DESTROYER creates that same tense thriller style of the great LA Noirs, the real subject isn't the system, but the personal struggle of a woman to protect those she loves, and ultimately to be at peace with herself. That this protection can only come with violent vengeance is fascinating - because it creates a female character as tough as any we've seen on screen, but one that is also hurt, fragile and trying to love. And that complexity is what makes this film so gripping.

A final comment from Mr Phil:  The score was very reminiscent of 1970s David Shire scores from films like THE CONVERSATION and this is a good thing.