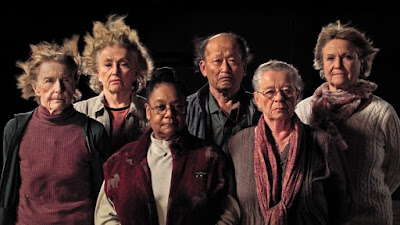 THE RAFT is a superb documentary about a bizarre social experiment run by an anthropologist Santiago Genoves in 1973.  Apparently inspired by a dramatic airpline hijacking, he wanted to prove that violence underlay all human relations. So he recruited 11 men and women from all over the world, and planned to sail them in a raft from Europe to Mexico. He decided that sexual rivalry, sexual shame, and race and gender rivalry underlay conflict. So he picked 11 attractive people of different races, as well as a priest, and made the women the crew.  They set sail and he was sure conflict would soon arise. The problem is that the crew didn't conform to his prejudices and so his manipulations continued while at sea. He tried to stoke arguments by reading aloud portions of their so-called confidential daily questionnaires. He tried to bully crew members to sleep with each other. And when a tropical storm hit, rather than by taking the captain's advice and going to harbour, he continued the experiment and removed her captaincy.

This fascinating tale of proto-reality show manipulation is told along two planes. The first is a linear retelling from the journals of Genovese, who has since died, and so voiced by an actor. He is quite explicit about the outcome he desires and his ruthless need to create conflict. It's quite shocking coming from an academic - this sort of poor methodology. The story is also told in counterpoint by some of the original participants - reunited for this documentary on a recreation of the raft.  I love the differing perceptions and opinions of the group and the way in which they are still learning from each other - from the white woman who can only grudgingly admit to Genovese's racism because she didn't see it firsthand as the black woman did.  But I was sorry not to hear the voices of the male sailors - except from a curiously shy Japanese photographer. At any rate the collective sailors seem to have achieved far greater wisdom than their leader.  But I shall refrain from giving the punchline and spoiling the final act of this fascinating documentary.

THE RAFT has a running time of 97 minutes. It's playing at this year's BFI London Film Festival as part of the Documentary Competition. There are still tickets available for all three screenings.
Posted by Bina007 at 14:52