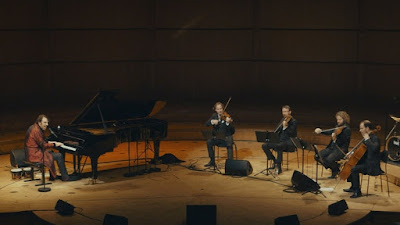 Chilly Gonzales is the avatar of pianist Jason Beck - the kid brother of the film composer Christophe Beck.  Early on he rebelled against the formal professional life his brother chose and decided to become an "entertainer".  He has some classical training, he's lived in Europe, he's played pop, rap, electronic music and a mish-mash of all of the above.  Apparently he's credited on Daft Punk's superlative Random Access Memories. But all I saw here was a mediocre classical pianist with an outsized ego and a willingness to shock (not to mention trash his brother) that seemed infantile.  Of course Jason/Chilly claims that this persona is a performance made for a boorish media, but it seems very true to his actual love of attention. And, if it isn't, this documentary by Philipp Jedicke doesn't attempt to get beyond the surface.  Let's put it this way - what I saw of Chilly I didn't like, and what I saw of this doc didn't give me anything more profound. It's as if Jedicke has taken our love for Gonzalez for granted.  This is a profound mistake - limiting the audience for an already niche film. I'm afraid I found myself with the Vienna Radio Symphony Orchestra - laughing at rather than with Chilly, and then progressively bored by his antics.  This is a short film but it felt very long.

SHUT UP AND PLAY THE PIANO has a running time of 82 minutes. There are still tickets available for two of the three screenings at the BFI London Film Festival 2018.
Posted by Bina007 at 16:38