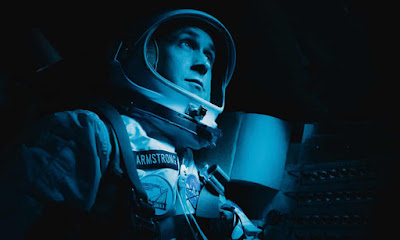 Damien Chazelle's FIRST MAN is a superb return to form after the mis-step that was LA LA LAND.  He tells the story of Neil Armstrong's moon-walk with a series of strong directorial choices that create a very intimate, almost melancholy picture that nonetheless manages to be literally awesome as we step onto the lunar surface. It's a film that's assured, mature, and emotionally resonant while never being mawkish. One can just imagine what this project might have been like in someone like Spielberg's hands.

As the film opens, Neil and Janet Armstrong (Ryan Gosling and Claire Foy) are coming to terms with the imminent death of their little girl Karen from cancer.  Neil - a talented engineer and test pilot - applies for NASA's Gemini space programme almost as a distraction.  The couple and their 5 year old son will have to move town, and it will be, in Janet's words "a new adventure". As the years and test flights progress, we come to know and feel a camaraderie with Neil and his colleagues.  They all seem to live close by to each other, and when fatalities occur, they share that pain.  This film invites us to share not only Neil's journey but also that of his wife - apparently she really did drive to Mission Control to demand their turn her squawk box back on during a particularly perilous flight!  The impression we get is that Neil was always a pretty buttoned up guy - that he channelled his grief into his work - and found talking to his kids about the chances of him not coming back pretty hard.

The beautiful thing is that these home-life scenes of quiet melancholy lay the foundations of the emotional payoff on the moon.  Those scenes are absolutely breathtaking - and even though we know the outcome - they still manage to be tense.  The first moment when we switch from the Super-16 grainy footage from Earth to the IMAX footage on the moon is a truly WOW! spectacle. But even then, there's something deeply personal and even introspective about it. The camera is on Neil's helmet - and so his reflected shadow on the moon - and we see him just take a moment to take it all in.  There's then a beautiful personal moment (apparently fictionalised but at this point who cares) that perfectly caps all that has come before.  And then we're home.

The result is a very moving film that pays tribute to the men who sacrificed their lives and didn't make it - and a film that does what I LOVE - which is to briefly but effectively open up its focus to events outside the bubble - to show the controversy of spending so much money on the space programme during a contentious war. It's also a film that uses music beautiful - whether weaving in the Armstrong's beloved but whacky theramin-heavy space track - or subtly referencing Kubrick with a waltz as a space-ship docks.