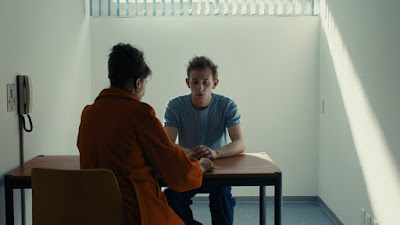 SHOCK WAVES: DIARY OF MY MIND posits a case where a teenage boy keeps a diary for his school teacher in which he imagines viciously killing his parents -and then viciously kills his parents.  The question that the prosecutor wants to know is why she didn't alert anyone to his violent thoughts and whether she is complicit in his crimes. I was expecting an intense two-hander, but what I got was a rather dull procedural that left me mystified. Fanny Ardant was good-ish as the teacher - but I found it really hard to get a handle on her character.  At one point she seems genuinely shocked and defends not reporting the boy's behaviour because it's just typical of angry teenagers - but her actions are questionable. When the boy gets day release from prison and his remaining family refuse to take him in, she offers him safe harbour.  And yet I can't say that there's any chemistry between the two characters - not even intellectual. Maybe that's because Kacey Mottet-Klein who plays the boy gives a performance that's flat and opaque.  I found myself struggling to maintain interest even in this short film.  What's even worse is that there's no visual flair, no style to this film.  It really is as banal as its protagonist.

SHOCK WAVES - DIARY OF MY MIND has a running time of 70 mins. It originally air on Swiss TV.  There are still tickets available for both screenings at this year's BFI London Film Festival.
Posted by Bina007 at 18:56