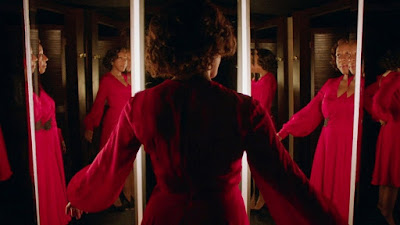 Karl Marx famously wrote that history repeats itself, first as tragedy, then as farce.  Much the same could be said of Peter Strickland's IN FABRIC.

As with his marvellous slippery, sensory, sinister, sexy BERBERIAN SOUND STUDIO and THE DUKE OF BURGUNDY, IN FABRIC creates a world that feels a little like a pastiche of 70s schlock, and straddles a tightrope between drama, horror and comedy.  In all of these films Strickland shows us that he has a unique and particular style of cinema that is unmistakably his, although at the end of this film, I was wondering if it was becoming rather samey.

In this film, Strickland creates a 1970s world dominated by a sinister department store complete with macabre owner - weirdly Victorian gothic sales assistants - its own florid, bizarre language - and apparently - a killer dress. That's right! The protagonist of this film is a malevolent red dress - colour: Arsenic red.  In the first hour of the film it's sold to a bank teller (Marianne Jean-Baptiste) who has started dating again after a divorce. She struggles at home to deal with her feckless son's pretentious girlfriend (Gwendolyn Christie) and at work to deal with her intrusive bosses (Steve Oram and Julian Barratt).  The story we see is one of moments of extreme comedy, but also genuine concern for our sympathetic heroine, and real fear for her safety. It's a triumph.


The problem is that Strickland then repeats almost the same story with the same dress, but this time the victim is a young man who was forced to wear it on his stag, and his fiancee who then decides she likes it. The comedy here is more broad - even tediously so.  The scares are more predictable (although Strickland does toy with our expectations with a few red herrings).  And overall, I felt this part of the film was pretty disposable.

IN FABRIC has a running time of 118 minutes. The film played Toronto and London 2018.  It does not yet have a commercial release date.
Posted by Bina007 at 22:20