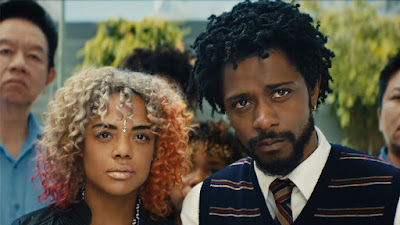 Cash Green (Lakeith Stanfield - GET OUT) is your typical millenial struggling to make rent in Oakland.  He gets a job as a salesman at Regalview but can't connect with customers until Danny Glover's older wiser colleague advises him to use his "white voice".  Once Cash does that, he starts making bank, and while his friends and girlfriend (Tessa Thompson - Westworld) are trying to unionise, Cash gets promoted. Problem is, what he's actually doing in his new job is selling labour - and not just any kind of labour - voluntary slave labour!  Cash does so well suppressing his conscience for money that Armie Hammer's rival megalomaniac tries to poach him to sell an even more bizarre form of labour, wherein he'll both control the labour and its malcontents.

The result of all this is a film that doesn't have the attention span to mine any of its ideas properly - but just keeps throwing more and more outlandish scenarios at the wall.  When it works it's great, but by the final half hour I had utterly lost interest in its absurdist premise.  The tragedy is that writer-director Boots Riley goes so far beyond his original concern about code-switching that we kind of forget what point he was making. (As a side note, I thought it would have been FAR more effective to show actual code switching rather than the allegedly funny ruse of dubbing the black actors with actual white voices). I feel that Boots Riley has a lot that is vital and urgent to say, but that he needs a strong producer to really edit down his thoughts so that each film is powerful and memorable for a single strong idea. There's just waaaay to much happening here for it to be coherent.

SORRY TO BOTHER YOU has a running time of 111 minutes and is rated R. The movie played Sundance and SXSW 2018 and opened this summer in the USA. It is currently playing the BFI London Film Festival and will open in the UK on December 7th.
Posted by Bina007 at 14:36