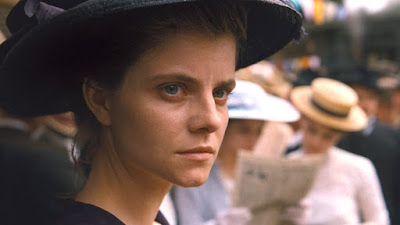 Like Laszlo Nemes' stunning debut feature, SAUL FIA, his latest film, SUNSET, is a movie so claustrophobic and intense - so beautiful and traumatic - that it winds you. It's hands down by favourite film of the festival so far.  Many directors are called or claim to be Kubrickian, but for my money it's Nemes who comes closest, with his precise and audacious lensing and framing, his languorous pacing, and his willingness to be obscure, mysterious, even nightmarish.  For all those reasons I can understand why many reviewers have struggled with SUNSET.  But I loved it.

The movie is set on the eve of World War One, in Budapest.  The Austro-Hungarian imperial power is shown through a ruling archduke and his wife, who patronise a high-end milliners.  It's to this store that our heroine and protagonist, Irisz Leiter arrives at the start of the film.  She seems naive, fragile, lost, and is applying for a job at the store despite the fact that her parents once owned it before being killed in a mysterious fire when she was a young girl.  The current owner, Oskar Brill, is immediately nervous of Irisz as is his assistant Zelma.  Irisz is surrounded by ominous snatched pieces of information delivered by threatening sources.  She has a brother she didn't know about.  He's a radical nationalist - accused of committing murder.  Then there's a mysterious Countess being abused, and girls being sold to the archduke....  I won't say more for fear or ruining the mystery.

What I loved about this film was its meticulous production design, lighting and shooting style. We move from luxurious palaces to ornate department stores to threatening underground political clubs, sometimes by street light or candlelight.  We feel the sense of threat and eeriness. The camera is always trained on Irisz - a technique carried over from SAUL FIA -but here Nemes loses the fish-eye lens that saved us from seeing the worst of the Holocaust.  Nonetheless he maintains the extreme shallow-focus that means the entire film is mediated through Irisz, with her face or the back of her neck filling much of the screen.  The result is the feeling of being trapped in a kind of nightmare.  And then, when we build to a pitch of intensity - when this frail girl shows a persistence and daring that is shocking - we move to an epilogue that hints at Kubrick and provokes as much as it resolves. Bravo!

SUNSET has a running time of 142 minutes. The film played Venice, Toronto and London 2018.  It does not yet have a commercial release date.
Posted by Bina007 at 21:20