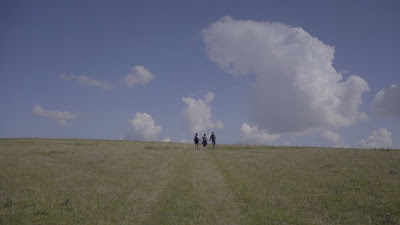 EVELYN is a genuinely moving and deeply personal documentary from the Oscar-winning documentarian Orlando von Einsiedel.  In sharp contrast with his Oscar winning short doc THE WHITE HELMET, and his Oscar nominated feature VIRUNGA, this film turns the camera back on the film-maker. Ten years ago he lost his brother Evelyn to suicide at the age of 22. Evelyn had been struggling with depression for years, and had been recently diagnosed with schizophrenia.  And in characteristic British stiff upper lip fashion, after he died, his siblings and parents barely talked about it.  So, ten years later, Orlando gathers together his family and then some of Orlando's close friends, to go on long hikes in the British countryside that Evelyn loved, to finally talk about him and their feelings about his death.

The resulting film is deeply personal but also relatable.  Even if we haven't personally experienced such a devastating loss (although many watching will have done) - a lot of us will have experienced friends and family with mental health issues and the difficulty or articulating our responses to those. This compassionate, human, vulnerable response to this still tough issue of talking about mental health is thus as important as it is engaging.

EVELYN has a running time of 95 minutes. It had its world premiere at the BFI London Film Festival 2018 where it is in competition for the Grierson Award.
Posted by Bina007 at 16:42