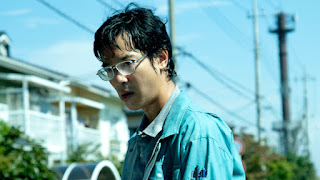 THE SAMURAI THAT NIGHT is a tough watch - dismal, drab, desperate - a tale of a woefully ineffectual impotent metal-worker and a sleazy bully, brought together by a casual act of violence and a disturbed act of vengeance.  The movie is tense, occasionally grotesquely funny, and less thrilling than enervating - an exercise of directorial control of pace and tone.

The movie is adapted and directed for the screen by Masaaaki Akahori from his own stage play about the meek worker, Ken, whose wife is the victim of a hit and run by charismatic bully Kijima.  At first, Ken's inability to get over his wife seems pathetic and weird, but when we realise he is preparing to kill Kijima and then commit suicide we become morbidly fascinated with the at times black comedy of this ineffectual man.  His scenes are intercut of those of Kijiima, who at first appears to just be a selfish idiot, but turns out to be a sadistic bully.  We almost want Ken to kill him, even though that would be to sanction Ken's psychosis.

But this is the genius of the film.  Because, to my mind, what it's really about is bad things happening because weak, bored, stupid people let them.  In each case of violence in this film, a bystander allows it to happen by either being actively complicit or refusing to stop it.  The women, too, seem to act out of a kind of stupour - like the security guard who walks slowly to her fate.  What does this tell us about Akahori's portrayal about contemporary Japanese society?  Of people complicit in their own terror because, to paraphrase, there's nothing on TV. The questions this film raises are provocative and worrying.

Which is not to say that the film is perfect.  I had a lot of problems with the cinematography. I get that the director wants the film to seem grubby and desolate but the grimy colours and murky shadows were frustrating - I kept wanting to wipe the camera lens.