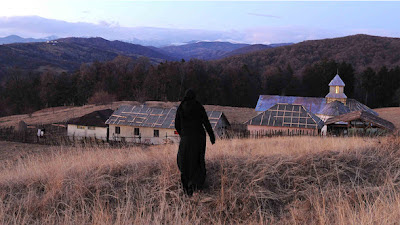 Today I have seen two films that both deal with three related problems.  First, what happens when good, faithful people put too much trust and respect in the religious hierarchy.  Second, what is the proper dividing line between the civil and church sphere of influence. Third, what happens when the basics of Christianity - love, charity, compassion - are transmitted through the ossified structures of an hierarchical organisation.    Both films are sophisticated, disturbing and beautifully constructed.   One is Alex Gibney's documentary, examining the crime and cover up of systematic child sex abuse in the Catholic Church, MEA MAXIMA CULPA: SILENCE IN THE HOUE OF GOD.  The other is BEYOND THE HILLS, Romanian director Cristian Mungu's follow-up to his critically acclaimed masterpiece, FOUR MONTHS, THREE WEEKS, TWO DAYS.

The movie is based upon a real story that was investigated by journalist Tatiana Nicolescu Bran, who then adapted that investigation into a play and now this screenplay. A young girl went to visit her friend, a novice in a remote Russian Orthodox monastery.  Somehow events transpired that she was the subject of an exorcism and tragically died.  The case blew up in the media and the priest was jailed.  All of this sounds highly sensational, but the genius of this film is to slow down the events and focus on the emotional heart of the tale, as well as the cultural tropes that allowed such a tragedy to happen.  Mungu shows that modern Romania is a place of overstretched public services and overcrowded rooms.  A place of deep-seated respect for the Church, and of old superstitions.  In a society so burdened, a young girl's distress at her former lover taking religious orders can quickly descend into a misdiagnosis of depression, medicalisation, and finally suspected possession.

The tragedy of this tale is that all the people involved are well-meaning. The doctor thinks the young girl will get more peace in the monastery and trusts the priest. The nuns all act on good intentions, albeit whipping themselves up into a panic, divining portents in logs and poultry.  The priest also believes he is acting for the best - he sends the poor girl away - it is she who returns, desperate to be with her lover even at the cost of faking a vocation.  He even chastises the nuns for their superstitions and the girl for her faith in healing Icons. But ultimately, he too allows his faith to over-ride common sense.  BEYOND THE HILLS thus shows what happens when good but uncritical people apply their faith in a kind of narrow and dangerous manner, and the lack of responsibility taken by both the civil and church authorities.  There is also an ambiguous hint that this poor girl was sexually abused by the man who sent her to work in Germany, and she is certainly defrauded by her foster parents - showing that it is not just the church, or the doctors, but the whole of this dysfunctional society that has failed this parentless girl.

The style of direction is the same as in Mungu's previous film: a masterful use of carefully constructed tableaux showing woman clucking in cluttered rooms.  Oleg Mutu's beautiful cinematography and lighting, capturing the bleak, hard rural life so that we can almost feel the cold damp air.  I love the ear for how people speak in banality when they are together, the subtlety of how the relationship between the two girls is depicted and the scrupulous balance of the story-telling. This is, if you like, a non-judgemental film that makes judgements - it tells us that their was gross incompetence and culpability here, but also genuinely good intentions.  It shows the dangers that the uneducated will fall prey to, without being patronising about their pre-enlightenment beliefs. That is an impressive feat to have performed.

BEYOND THE HILLS played Cannes, where Cristina Flutur and Cosmina Stratan won Best Actress, and Cristian Mungiu won Best Screenplay, and London 2012. It is on release in Russia, opens in Greece on Nov 8 and in Belgium, France and the Netherlands on Nov 21.
Posted by Bina007 at 18:00