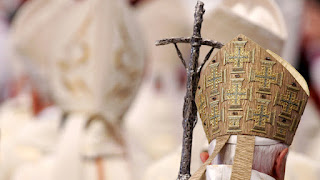 Alex Gibney is a documentarian with exceptional credentials, making polished, balanced, clearly articulated films that explore the frailties of individuals (CLIENT 9: THE RISE AND FALL OF ELIOT SPITZER) and institutions (ENRON: THE SMARTEST GUYS IN THE ROOM).  His latest documentary is an equally well-made and compelling investigation of child sex abuse in the Roman Catholic Church and its cover up at the highest reaches of the Church.  He begins with the case that originally brought attention to the scandal - the abuse of deaf schoolboys in Wisconsin by a predatory priest.  Gibney is privileged to have open and affecting testimony from the boys who reported these crimes as early as the 1960s, and now men, have tirelessly sought to bring attention to this matter and hold the Church in America, as well as the Vatican, accountable.

Gibney uses this case to show the typical traits of the cover-up: the Church's concern to burnish the image of priests rather than to protect the children; the "fixer" who was sent to settle out of court; the frustration of the American clergy who tried to affect change but were blocked by the Vatican.  Gibney then widens the discussion to show how sexual abuse has always been endemic in the Church, and how this is not just a contemporary American scandal but one that is global in its reach. Most powerfully, Gibney demonstrates that in his time as Cardinal Ratzinger, the current Pope knew of the scope of the scandal but did nothing to protect children.

As a concerned Catholic, this documentary didn't tell me anything I didn't already know. But it did present the facts in a clear and convincing manner and give me a new admiration for, and perspective on, the courage of the deaf children who spoke out first.  I felt it could've explored what I feel to be the key issue further: the false separation of civil and canon law.

So much of this abuse took place because the good faithful people of the Church were encouraged to put so much faith in the Clergy, so that accusing them of crimes became almost heresy.  Even worse, prosecuting the priests became problematic even when someone had the courage to speak out, because the Church, as a State, asserted its right to prosecute the priests under canon law, and under the seal of confidentiality, rather than allowing the civil justice system to deal with them.

The documentary interviews Geoffrey Robinson QC, a highly respected British human rights lawyer who argues powerfully in his book "The Case of the Pope" that for too long civil authorities have allowed the Church to get away with policing themselves on the tenuous grounds that the the Vatican City is a state, the Pope and his Papal Nuncios have diplomatic immunity, and Canon Law has some kind of equivalence to Civil Law.

I would have loved to see the documentary get more into this aspect of the case.  Because that is really the heart of the matter:  the Church can assert that the Priest is ontologically different from a lay person, but before the law, they must and should be equal.  If that had been the case, these crime would have been exposed and prosecuted sooner, and the Church of which I remain a member, would not be as compromised and guilty.