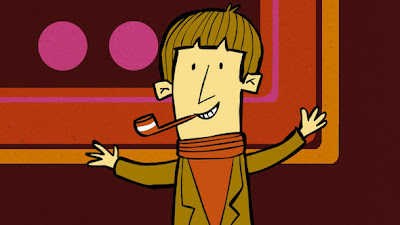 A LIAR'S AUTOBIOGRAPHY is a wonderful, intimate, irreverant animated biopic of Graham Chapman, member of Monty Python's Flying Circus, and perhaps most famous for portraying Brian in THE LIFE OF BRIAN.  He was a complicated character - a grammar school boy who did good, studying medicine at Cambridge, where he joined the Footlights, met the bright young things of comedy of his generation, and eventually made his way to Python.  He was a bundle of contradictions - contradictions that he himself struggles to grapple with in his slippery, brilliant autobiography with its caveat emptor title.  A pipe smoking, tweed wearing rugby player, he came out at a time when that was a very brave thing to do.  Openly gay, he remained a closet alcoholic - perhaps surprisingly, an addiction picked up while a medical student, rather than in the supersonic rise to fame as a Python.  This led to him becoming, eventually, a bit of a liability on set, but he carried out until the Pythons retired and he, tragically, died before his 50th birthday of cancer.

The marvellous thing about the movie is that you can tell it's made by people who care - not just about Graham but about respecting his memory by being - well, disrespectful!  It's a movie that honours his style and humour while also being honest about the elusive nature of his character.  Maybe that reflects the fact that it's made people who are evidently fans - or colleagues - or relations of colleagues.  The remaining Pythons all voice the animation and one of  the three directors (Bill Jones, Jeff Simpson and Ben Trimlett) is the son of a Python.  The real genius is to make an animated film rather than a conventional documentary splicing vintage film and interviews with the Pythons.  Moreover, to create a patchwork quilt of different animation styles using many many different animators.  It gives the movie a unique beauty while also conveying something of the gonzo patchwork nature of Chapman's life and character. There are genius moves - like stunt casting Cameron Diaz as Freud - and lots of Python in-jokes.  For instance, in an early scene, where Chapman's father locks his book in a glove compartment we see a can of spam inside.  A passing building is graffiti'd "Romanus eunt domus".

My suspicion is that this densely packed humour and deep love for Chapman makes this movie one for hardcore Python fans alone, rather than a wider public. That said, fans of animation, rather than Python, should check it out purely for the bravura display of styles.