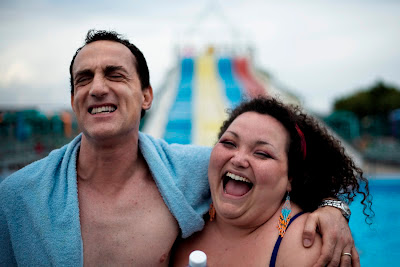 Our latest top pick for this year's London Film Festival also makes it onto our Best of 2012 list - an hilarious, absurd and yet haunting comedy about our obsession with reality TV from the director behind the mafia documentary GOMORRAH, Matteo Garrone.  REALITY has three showings at the London Film Fest, and tickets are still available for two.  Check out the BFI website for more information.

REALITY is an astounding and disturbing film - equally funny and provocative - finding a delicate balance between the absurd and the tragic. Set in contemporary Naples, the movie opens with a bravura  aerial/tracking shot that sees a gaudy, glitzy golden carriage carry a bride and groom into a wedding ceremony of lurid grandeur.  Alexandre Desplat's score has some of the mischief and fairytale madness of Danny Elfman's Tim Burton soundtracks, and the deliberate framing and wonderfully mobile cinematography lend the scene an energy and vivacity. The director is evidently captivated by his grotesques, eschewing any kind of patronising sneering at these Italian chavs.  The whole thing is crazy, faintly disturbing, but somehow alluring.

The wedding guests go wild for the star attraction - a recent winner of Big Brother - and this adulation sparks the envy, admiration and almost childlike awe of local fishmonger and small-time scam-artist, Luciano.  He is a simple, warm-hearted man whose love for his children allows us to forgive him the comedic absurdity of dragging an old woman from Mass.  After all, in working class Naples, everyone's running a scam, and this movie is at its best when it captures the everyday corruption, the warmth of families living in cramped, cruddy conditions - a city so rotten that its masonry is crumbling - a city that's so much fun we luxuriate in its larger-than-life characters and long-standing friendships.  The first hour of REALITY is filled with these beautifully choreographed, effervescent family tableaux.

As we move into the second hour of the film, the film becomes tragicomic as Luciano's dream of becoming a contestant on Big Brother comes rather close to reality - he even gets to go to Cinecitta in Rome for an audition.  But this glimmer of hope is fanned into a kind of madness as he starts to believe that casual passers-by are vetting him as a potential contestant. The movie subtly raises interesting parallels between traditional and contemporary Italian, if not western, society.  In generations past, our moral codes had a religious imperative - we did good, if we did at all, partly because we feared an omniscient and omnipresent god was policing us.  By contrast, Luciano does good because he thinks he is being vetted. Big Brother is always watching, and is the beatific calm that Luciano experiences in his good works any less valid?  The movie gives a clear answer.  The disturbing near maniacal laughing and insane isolation at the end of the film - the fact that we are not prosecuted by, but desirous of Big Brother's ever-open eye - the subtle contrast of a Cinecitta used to film shoddy reality shows with the august history we cinephiles know it has....This is a movie about decadence - moral, material, and finally mental.

It made me laugh. And then it didn't.

REALITY played Cannes, where it won the Grand Prize of the Jury, and London 2012.  It is currently on release in Italy and France and opens on October 11th in Russia; on October 25th in Portugal; and on November 7th in Belgium and the Netherlands.